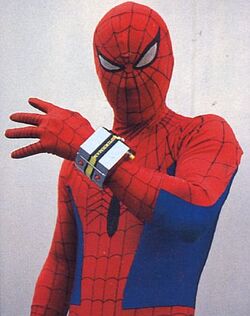 The Spider Bracelet is the source of powers for Takuya Yamashiro, the Spider-Man of Earth-51778. Given to him by a dying alien named Garia, the bracelet houses the Spider Protector suit and spare mask for Takuya when his is removed without permission. The bracelet vanishes when not in use and acts as a multi-purpose tool for detecting mines, identifying extraterrestrials, unlocking doors, reflecting lasers, remote viewing, controlling homing devices as well Spider Machine GP-7 and Leopardon. It also acts as Takuya's Web-Shooters, dispensing Spider Strings and Spider Net through button or voice command.[1]

Like this? Let us know!
Retrieved from "https://marvel.fandom.com/wiki/Spider_Bracelet?oldid=6432069"
Community content is available under CC-BY-SA unless otherwise noted.