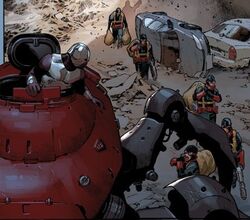 After making the Raft his new base of operations and renaming it "Spider-Island Two", Otto Octavius had decided to hire his own henchmen to better aid him in his war on crime in New York City.

Taking down the Hand

The Spiderlings' first mission was to assist Spider-Man in destroying the Shadowland Fortress and freeing the people living in Hell's Kitchen from the oppression of the Kingpin. Spider Squad 7 was put in charge of protecting the residents of Hell's Kitchen, while the rest of the Spiderlings helped Spider-Man battle the Kingpin's army of Hand ninjas.

Shortly after the fall of Shadowland, the Spiderlings assisted Spider-Man and the N.Y.P.D. in capturing the Hobgoblin. At the same time one of the Spiderlings was kidnapped and interrogated by Wraith and Officer Cooper about how Spider-Man is able to pay them their salaries.

Following a confrontation with the Spider-Man of 2099, Spider-Man ordered the Spiderlings stationed at Spider Island to use the Spider-Bot network to track down the "impostor".

The Spiderlings later reported to Spider-Man that Stunner had returned and was attacking the Daily Bugle. They wanted to help Spider-Man in capturing Stunner, but he ordered them to stay put as he wanted to handle her personally.

When the newly reformed Frightful Four attacked city hall to force Mayor Jameson to relinquish control of the city to them, Spider-Man has a squad of Spiderlings escort Mayor Jameson and his staff to safety while the rest helped him to battle the Frightful Four.

As Spider-Man subdued the Wizard and Klaw, the Spiderlings attempted to contain Carnage, but proved no match for this new iteration. The squads who fought Carnage were all killed and had their tongues cut out, so Carnage could line his coat with them as trophies.

The remaining squads of Spiderlings, equipped with flamethrowers, regrouped with Spider-Man and helped him to subdue the Wizard, who was now bonded to the Carnage Symbiote, but proved unsuccessful in stopping his rampage.

Following the incident, Spider-Man had a Spiderling report to an undisclosed location inquire on the mental state of Cletus and the Wizard following the battle. The Spiderling was unhappy to hear that the prison doctor couldn't confirm if the Wizard remembered anything from the battle as he knew Spider-Man wouldn't be happy to hear that. He was surprised to hear that Cletus' mind had been repaired by the symbiote during their brief rebonding, but dismissed as nothing.

Following the release of the Terrigen Mists in the wake of Thanos' invasion of Earth, Spider-Man had the Spiderlings assist the various emergency response teams in rescuing people, cleaning up the debris, and repairing the damage Thanos' army had inflicted on the city.

After the clean-up was done, Spider-Man had a squad of Spiderlings accompany him to the headquarters of the newly formed Mighty Avengers to help him force Luke Cage and Jessica Jones to relinquish leadership of the team to him. Luke and Jessica refused and attacked Spider-Man and his Spiderlings for assaulting their home and making demands of them.

Spider-Man and the Spiderling squad were able to easily defeat the couple, but were thwarted by the untimely intervention of She-Hulk. Spider-Man eventually decided that his bid for leadership of the team wasn't worth all the effort, so he resigned from the Mighty Avengers and fired the Spiderling squad for failing him. Once Spider-Man had left the now unemployed Spiderling squad asked Luke if he could give them a job with his Avengers team as they had families to support and were in desperate need of money. Luke told them that he would try to find them a place in his team after they cleaned up the damage their battle had caused.

When Agent Venom returned to New York City to track down the new Crime Master, the Spiderlings assisted Spider-Man in trying to apprehend Venom. Unfortunately, Venom was able to escape before they could capture him, but continued to search for him while questioning the N.Y.P.D. officers who were present during their attempt to apprehend Venom on his whereabouts.

Later, after Spider-Man had been taken as a host by the symbiote, the Spiderlings helped the new "Superior Venom" fight off the Avengers who were trying to capture their boss, but were defeated by the Avengers' superior tactics and overwhelming force.

Not long after the infiltration, the Goblin Underground launched a full scale assault on Spider Island. Many of the Spiderlings were slaughtered while they valiantly tried to defend their headquarters from the Goblin King's forces. When he realized the battle was lost, No. 23 tried to convince Spider-Man that they should evacuate and regroup, but was killed in an ensuing explosion caused by a stray Pumpkin Bomb.[1] Seeing No. 23 die right in front of his eyes, convinced Spider-Man to retreat with the Living Brain to Parker Industries. It is currently unknown if any of the Spiderlings survived the assault.

Later on, Looter assembled a group of former Spiderlings, who used people's lack of knowledge that they no longer worked for Spider-Man to facilitate their criminal activities. Spider-Man and Silk spotted them while on patrol and stopped them. They were finally stopped by Spider-UK's Spider-Army.[2]

Spider-Bots: The Spiderlings use the Spider-Bots surveillance network to monitor crime in New York City, so they can respond the instant a crime occurs.

Electromagnetic Wing Harness: The Spiderlings have access to fully functional replicas of the Vultures' wing harness that Spider-Man created to help them better combat super powered criminals. The replicas appear to have all the capabilities of the original.

Vibro-Shock Gauntlets: The Spiderlings have access to fully functional replicas of Shockers' gauntlets that Spider-Man created to help them better combat super powered criminals. The replicas appear to have all the capabilities of the original.
Transportation: Arachnaughts: The Arachnaughts serve as the Spiderlings main form of transportation and are used as a form of tank in major assaults against large groups of criminals.

Spider-Glider: The Spiderlings have access to fully functional replicas of the glider used by the various goblin themed super-villains that Spider-Man created to help them better combat super powered criminals. The replicas appear to have all the capabilities of the original.
Weapons: Various firearms: The Spiderlings use various varieties of firearms ranging from handguns to bazooka to combat the non-super powered criminals.

Flamethrowers: The Spiderlings use flamethrowers to combat Symbiotes as fire is one of their greatest weaknesses.

Chest Harness: The Spiderlings have access to fully functional replicas of Doctor Octopus' tentacles that Spider-Man created to help them better combat super powered criminals. The replicas appear to have all the capabilities of the original.

Retrieved from "https://marvel.fandom.com/wiki/Spiderlings_(Earth-616)?oldid=5243254"
Community content is available under CC-BY-SA unless otherwise noted.