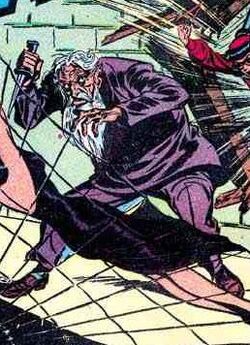 The man known as the "Spiderman" of the 1940s was an assistant of famed etymologist Professor Morte. By 1947 he had begun to feel neglected in his life and began experimenting with spiders, feeding them human blood and somehow managing to get them to grow to massive size. He had hoped to create an army of these massive spiders to take over the world.

In order to keep his creatures alive, he developed a steel mesh webbing that he used to trap victims whom he drained of their blood. In order to protect his identity, the assistant disguised himself as Professor Morte. On one of his nights stalking the woods, the Spiderman was interrupted by the arrival of Miss America, but he managed to escape, but not before Miss America was able to get his net.

Ironically enough, when the authorities called in Professor Morte to examine the webbing. Morte suggested that the killer was a massive spider, and Miss America -- having fallen for the assistants disguise -- suspected Professor Morte of being the killer. She then left to investigate alone, hoping to draw out the Spiderman. Morte and his assistant rushed out of the police station soon afterword. Putting on his disguise, the assistant attacked Miss America once more in the forest, but she kicked his knife away before he could stab her and then fled.

Following him back to Morte's home, Miss America confronted Morte who denied being the Spiderman. The assistant then attacked, binding Miss America in his web and revealing his identity. He then took Morte and Miss America into his lab where he revealed his plan and his creations. However, before he could drain Miss America of her blood, she kicked him sending him reeling into the glass cases where his spiders were kept. Freed, the massive spiders then devoured their creator while Miss America and Professor Morte fled the scene.[1]

Shortly thereafter, the authorities then gassed the spiders to death.

An apt scientist, 'The Spiderman' was able to create a flexible mesh netting shaped like a web that glowed and had the strength of steel.

The Spiderman used a knife to bleed out his victims. He was also successful breeding two giant spiders that had a lust for human blood and were bulletproof.

Like this? Let us know!
Retrieved from "https://marvel.fandom.com/wiki/Spiderman_(1940s)_(Earth-616)?oldid=4787633"
Community content is available under CC-BY-SA unless otherwise noted.