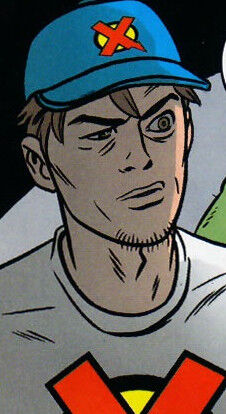 Spike Freeman first purchased the X-Force with high hopes for making even more money off of them through their conflicts and controversies. He was responsible for many events in the team, such as Vivisector becoming romantically involved with Phat, the Spike and Venus Dee Milo joining the team, and many of the team members dying. He always had a rough love/hate relationship with the Orphan, which ultimately led to Spike's death.

When Lacuna discovered some of Spike's shady dealings with Mr. Code, namely their weapon deals, Spike told Mr. Code to kill Lacuna. When Orphan and the others confronted Spike about this, he responded untruthfully, telling that he had no choice, and that Mr. Code would have killed him if he did not comply. Knowing that Spike was going to have Lacuna killed, Orphan took the initiative and jump-kicked Spike in the head, breaking his neck and thus killing him instantly. In a later issue of the X-Statix, Dead Girl used her powers to communicate with the deceased Spike Freeman, bribing him with money that would work in the afterlife to tell her all about the dark dealings. Spike, lured by the cash, told Dead Girl all about his deals with Mr. Code, and left happily with his deceased credit card.[citation needed]

Like this? Let us know!
Retrieved from "https://marvel.fandom.com/wiki/Spike_(Freeman)_(Earth-616)?oldid=5320173"
Community content is available under CC-BY-SA unless otherwise noted.