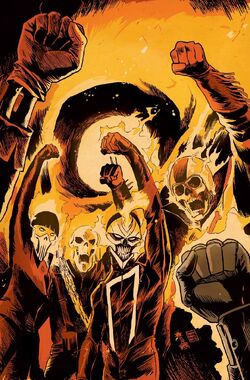 Base of Operations
Mobile; formerly the Killiseum
Affiliations

The Ghost Racers were people from all around the Battleworld who came to be possessed by an Igniter Spirit. For being too powerful, the hosts of such power were all sent to the Killiseum, in Doomstadt, where they would be forced to race through its dangerous circuit to entertain the arena's audience. In case they succeeded in gaining the first place prize, they would be granted a temporary freedom from the arena, while the rest would be sent to its dungeons to be tortured by Chief Zadkiel, who was able to control the Igniter Spirits.[1]

The night Arcade planned to get rid of Robbie Reyes, the most recent Igniter Spirit to enter the Ghost Races who had won every race in that season, the unexpected happened: while being chased by Arcade's killer automaton, the Venus Compiler, Robbie and his Spirit of Ignition managed to break free of Zadkiel's control and escape the arena through a portal. As Zadkiel wasn't able to detect Reyes' presence, an enraged Arcade commanded him to send all the other Ghost Racers to hunt him down.[2]

Although Robbie avoided the Thors, the Spirits of Ignition found him and they battled through the streets of Doomstadt. They destroyed Robbie's Battle-Charger, forcing him to confront them directly. While battling Alejandra Jones, Robbie repelled one of her attacks and it ended up destroying Slade's blindfold, making him get out of control as it unlocked his dormant powers. Slade then used his Penance Stare in Robbie, which somehow temporarily broke the link between him and Zadkiel. Free, Slade broke Zadkiel's control over the others by shutting their powers down. However, as Robbie was the only one who Zadkiel couldn't control, the other racers let him get away and stayed behind. They were all returned to the Killiseum and punished for their treachery.[3]

Arcade made Robbie return to the Killiseum by putting his brother, Gabe, in his place (as he was possessed by an Igniter Spirit too) in the Ghost Races. After saving his brother from T-Rider Rex, Robbie decided to put an end in Arcade's sadistic games in the Killiseum, so he used his Penance Stare in Slade once again to free the Spirits of Ignition, like he did earlier, and they destroyed the Venus Compiler. Furious by the Spirits' resistance, Zadkiel tried to kill Gabe, but Robbie switched places with him and ate Zadkiel's soul. Afterwards, Slade used his vengeance-seeking Penance Stare to kill the wicked people present at the Killiseum and escaped along with the other Ghost Racers through another portal opened by Eli, running over an injured Arcade in the process. Freed, the Ghost Racers vowed to punish the wicked and corrupt with their power, and thus were born the Spirits of Vengeance.[4]

Retrieved from "https://marvel.fandom.com/wiki/Spirits_of_Vengeance_(Earth-15513)?oldid=5551244"
Community content is available under CC-BY-SA unless otherwise noted.