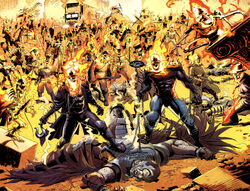 The Spirits of Vengeance were a team of benevolent beings who protected mankind during ancient times. Their exact origins are a mystery, as some have claimed that they were the vestiges of God's power bonded to human hosts and calling themselves Ghost Riders, while others have claimed them to be demons in the service of Mephisto.[3] There have been different sorts of Spirits of Vengeance around the world based on each country's customs, belief and religion. Keeping them in charge was the archangel Zadkiel, whose sole purpose was to keep the Spirits' purportedly true place of origin a secret.[1]

The earliest known occurrence of a Spirit of Vengeance indwelling a human occurred in 1,000,000 BC, when a young boy belonging to a mammoth-riding tribe of early humans bargained with Mephisto to obtain revenge against a Wendigo who had slaughtered his people.[4][5] At some point afterwards, the Rider joined the Stone Age Avengers and defeated Zgreb the Sorrower, a corrupted Celestial.[6] When the First Host arrived, the Rider fought alongside his allies to repel them.[4] Following this, the Rider and his allies opposed Mephisto and other threats to the nascent humanity, such as time-travelling conquerors.[7]

According to Sister Sara, following the Great Flood that wiped out almost the entire human population ended, God created a rainbow signifying his promise to humanity that he would never smite his wrath upon the face of the Earth. However, he continued to witness mankind committing countless misdeeds and ungodly actions, which eventually infuriated him. The Spirits of Vengeance, vestiges of God's power bonded to human hosts, were designed to fight off the thriving supernatural and satanic threats, as well as purify sin and wreak havoc on the guilty for their mistreatment towards the innocent and undeserving. Over the generations, the Spirits pursued their cause to purge the unrighteous.

The archangel Zadkiel was put in charge of monitoring the Spirits of Vengeance and keeping the truth of their origins a secret throughout the millennia;[1] with one purportedly false origin story being that they were an order of benevolent demons opposing by the devil Zarathos - who is often counted among them due to his similar powers and appearance; connected to the Ketch and Blaze bloodlines through the Medallion of Power.[8] Regardless of their origins, there have been dozens - if not hundreds - of Spirits of Vengeance throughout the centuries, many of them found in what became the United States of America.[1]

The Last Stand of the Spirits of Vengeance

During this event, most of the Spirits of Vengeance population disappeared due to the corrupted motive brought by Danny Ketch, which was given to him by Zadkiel, whose plan was to collect all of the Spirits' power to break down the walls of New Jerusalem and wage war on Heaven.[9] After the walls were felled, the Spirits rained down from the sky and were returned to their rightful hosts. and to others such as Vengeance.[10]

When Mephisto brought Hell into Las Vegas via the Hotel Inferno, he bonded Doctor Strange, Falcon, Captain Marvel, Thor, Hawkeye, Black Panther, and Kaine to Spirits of Vengeance, turning them into Ghost Riders under his control.[11][12]

After Johnny Blaze became the King of Hell, he recalled the Spirits of Vengeance possessing his allies and summoned every Ghost Rider that had the Hell-Lord had ever created to take revenge.[13]

According to Sister Sara, the Caretaker, the Spirits of Vengeance were the divine wrath of God, while according to others they are demonic entities that serve Mephisto and others who sit upon the throne of his Hell.[3] Regardless of their muddled origins, their powers are "boundless" and "god-like" -- capable of doing incredible feats and competence as explained by Doctor Strange making them one of the strongest and most powerful supernatural entities to exist but are only limited due to the human host lack of imagination. The host itself acts as a "built-in safety lock" to prevent the Spirit from exacting its full potential. If the Spirit is controlling the Ghost Rider, the results would be biblically catastrophic and the human host can only influence the Spirit's decisions. If the host is in control, it would not be as powerful as the Spirit. Nevertheless, the Ghost Rider is still very powerful even in its weakest state.[14]

Vessel Possession: The Spirits do not require any human host to bond with. They're capable of enduring for themselves rather than needing a vessel to live. However, as immortal and benevolent weapons, they must possess a human host through various means in order to thwart any evil presence. The Spirits are considered to be ruthless against impurity and will torture the host for preventing it to fight off wickedness. This could cause several psychological and spiritual predicaments. If the act of prevention does occur, it will lead to either the Spirit having absolute control or losing the host's humanity succumbing to an incurable monstrous state.[citation needed]

God-like Capabilities: Like other overpowering figures, the Spirits have various capacities that challenges those of godly-powered individuals.[citation needed]

Sin Manipulation: The Spirit's main purpose is to cleanse sin. They can control and be empowered with the negativity released from the world.[citation needed]

Soul Manipulation: They can manipulate the very life giving essence of each being. They can do a number of things:[citation needed]

Elemental Manipulation: All Spirits can control elements, whether earthly, supernatural or cosmic; and use it to their advantage.[citation needed]

Magic Manipulation: Whether it is divine or malevolent, angelic or demonic; the Spirits can control, project and generate mystical energies that empowers them and can utilize it in a multitude of ways. One of the Spirit's known magical elements to control is hellfire, a demonic element that can do physical and spiritual damage.[citation needed]

Immunity/Resistance: The Spirits are immune to almost many of conditions such as infections. They're highly resistant to such conventions that apparently, reality warpers seem to give them no complications.[citation needed]

Demonic Transformation: As the Ghost Rider, the Spirit will reveal itself through the process of transformation. The reason it appears to be a flaming skeleton is because of its purpose to unleash unholy vengeance. It's nether worldly appearance strikes fear unto those who look at it. Most of the Spirit's powers are more evident through the Ghost Rider.

Anything they can imbue their hellfire with is a weapon. Their most known weapon to use is a mystical chain capable of growing in great lengths, control the movements with the Rider's mind and penetrate almost anything it breaks.[citation needed]

As Ghost Riders, they can utilize any form of transportation, whether it be a vehicular machine or an animal, they can alter its appearance and mechanics transforming it to a Hell Vehicle.[citation needed]

Like this? Let us know!
Retrieved from "https://marvel.fandom.com/wiki/Spirits_of_Vengeance_(Earth-616)?oldid=5799357"
Community content is available under CC-BY-SA unless otherwise noted.