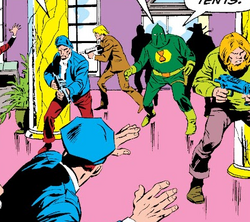 After Cornelius van Lunt destroyed his business career, the man known only as Wilkins organized the Split-Second Squad to destroy Van Lunt in turn.
The Split-Second Squad, so named for their exact timing during robberies, were thwarted in a waterfront heist by the Avengers. A week later, their bank robbery was derailed by the Black Panther but they escaped thanks to a gas gun attack from Onionhead. Learning that the Avengers had been hired by Van Lunt to do menial labor, Kronus set a trap for them at a tunnel beneath the East River. The Squad set off a bomb to kill the team, but the Avengers (suspecting that Kronus was Van Lunt) anticipated the trap and mopped up the Squad in, well, seconds. All, including Van Lunt, were surprised to learn Kronus was Wilkins.

Retrieved from "https://marvel.fandom.com/wiki/Split-Second_Squad_(Earth-616)?oldid=5551248"
Community content is available under CC-BY-SA unless otherwise noted.