Perfected by Daryll Weathers in the year 2041.

This suit was conceptualized by Dr. Carl Weathers while working for Hydra, but the scientist decided he'd rather sell his work to the highest bidder than give it to his employer.

Dr. Weathers was then extracted from a Janus Research facility in Virginia by a S.H.I.E.L.D. Tactical Team led by Deadpool.

Bob, Agent of Hydra informed Deadpool of the Time-Travel Harness project, but said the organization believed Dr. Weathers was still years away from developing a working prototype.

However, unbeknownst to both Hydra and S.H.I.E.L.D., Dr. Weathers' son Daryll had already utilized a functioning copy of the Split Second Temporal Dislocation Harness suit,[1] perfected by Daryll Weathers in Brooklyn twenty-six years into the future,[2] to travel back through time in an effort to prevent the death of his brother Darius in present day Manhattan.[3] 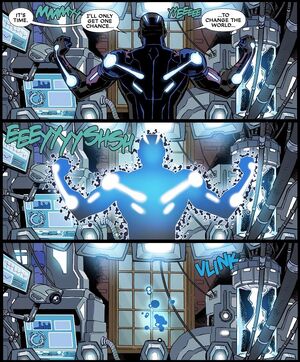 Split Second then repeatedly jumped seventy seconds into the past, creating a pocket temporal anomaly in hopes of preventing the boy's death, but each time either Deadpool, Cable, or Split Second accidentally killed various bystanders. By the fiftieth rewind, Wade had memorized the chaotic sequence of events and exploited that knowledge to get behind Daryll with Cable's gun, just has he reappeared in the timeline, blasting him through the chest. This damaged the buffers in the harness, destabilizing the drift of chronal particles and resulting in a massive explosion that seemingly erased the trio from existence.[3]

But Deadpool and Cable instead found themselves in the year 2050 where they were immediately attacked yet again, this time by a time-traveler wearing a different temporal suit and calling himself Loop. During the time displacement, something happened to Cable and he was babbling incoherently, because a temporal cancer lesion had formed on his brain. This forced Wade to defend him, as Nate was apparently Loop's target for assassination. Eventually the NYPD arrived, and Loop fled the scene. Returning to the Timetech Facility, he ran into Deadpool yet again, and revealed himself to be none other than Wade Wilson. Dr. Carl Weathers, now the Temporal Adjudicator working for the Time Variance Authority, then recruited Deadpool to help cure the cancer within the timestream, giving him his own Loop Temporal Dislocation Harness, before sending them both back in time to save the universe by killing Cable.[5]

The pair then jumped back and forth in time, between Earth-616 and Earth-4935, charged with fulfilling the Time Judge's orders of assassinating Nathan Dayspring, only to have Deadpool repeatedly save his life every time. Eventually Wade realized that it was Split Second, utilizing a repaired Split Second Temporal Dislocation Harness, who was trying to kill Cable in all the timelines, so he anticipated where he'd attack from at the next attempt, then dropped in behind him, shooting Daryll in the back of the head with a Temporal Pulse Pistol.[6]

Returning to the present day in Earth-616, Deadpool tased Split Second, preventing Darius' accidental death, and learning Split Second's true identity. Shortly thereafter Cable arrived and took Daryll back to 2050, seizing the Split Second Temporal Dislocation Harness for himself. He then returned to Earth-4935, believing that he had to fulfill the Temporal Adjudicator's previous mission of killing himself across multiple timelines to remove the temporal cancer from his brain.

Retrieved from "https://marvel.fandom.com/wiki/Split_Second_Temporal_Dislocation_Harness?oldid=5232914"
Community content is available under CC-BY-SA unless otherwise noted.