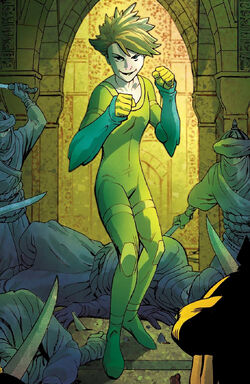 Unlike the more stoic and noble members of the Eternals, Sprite is considered a trickster, often taunting his fellow Eternals with his illusions.[7] He pranked humans for centuries under various guises, including "Puck," inspiring Shakespeare's character of the same name,[8] as well as Peter Pan.[4]

When the Fourth Host of Celestials arrived, Sprite stayed behind when his fellows formed the Uni-Mind to commune with the host. Spotting an atomic Deviant vessel speeding for the Celestial ship, Sprite chose to act by releasing the Forgotten One from his centuries of confinement to confront them.[9] After the Forgotten One returned, Zuras punished the duo by making each responsible for each other.[10]

Unable to grow up, Sprite became tired of being treated as the eleven-year old he appeared to be. By tapping the power of the Dreaming Celestial, Sprite was able to wipe the memories of his fellow Eternals and give them new lives as human beings, a change that would have enabled him to finally be allowed to grow up. Sprite pretended to be a child actor named Colin in a show called That's So Sprite.[4] After his plan was thwarted, Sprite was murdered by Zuras for what he had done to his fellow Eternals.[11]

After the mass suicidal event that led to the Eternals' demise,[12] they were all reborn due to their eternal (both species and longevity-wise) nature. Sprite was resurrected as a female and, due to her crimes, she was imprisoned in the Exclusion and was only restored to her last safe backup. As a result, Sprite no longer remembered the last few hundred years of her life.[13]

By the time Ikaris was resurrected, the other Eternals had decided that Sprite was to be freed and Zuras appointed Ikaris to look after the trickster. Once freed, Sprite transited to New York City with Ikaris close behind. While there, they encountered Iron Man, before detecting a rogue Deviant in the sewers and quickly subduing it. Sprite and Ikaris then returned to Olympia, where they were informed by Phastos that Zuras had been murdered. Now being the prime suspects, Ikaris and Sprite fled the scene and followed a trail that led them to the ruined city of Titanos, where they encountered the Mad Titan Thanos.[13]

Ikaris eagerly battled Thanos but Thanos proved too much, so Sprite created an illusion of Ikaris to distract Thanos while she and Ikaris escaped. The pair returned to Olympia and told their fellow Eternals of Thanos' return. Phastos later revealed that the wardens of the Exclusion were dead and the resurrection machine was inoperable, so the Prime Eternal Zuras couldn't be resurrected. As Druig and Ikaris accused each other of treason, Sersi appeared and took Ikaris away to heal him. While Ikaris talked with Sersi, Sprite, Phastos, and Kingo Sunen, they discovered that Thanos had been given an exception that enabled him to use the Great Machine's transit network, indicating that there was a traitor among the Eternals. Also, the machines of resurrection were connected to Earth's biosphere; if they weren't fixed in time, Earth would be rendered uninhabitable for humans.[14]

As an Eternal of Earth Sprite is descended from the original Eternals created by the Celestials and is further empowered by Kronos' experiments with the cosmic life-force.

Near-Immortality: Eternals like Sprite possess total conscious control over their molecular structures, which are reinforced by cosmic energy. As a result, they are virtually immortal and indestructible. They are also virtually invulnerable to any force weaker than their own cosmic energies or total molecular disintegration.[citation needed]

Super Strength: Sprite can bench/press at least several tons. However, he can increase this though his levitation and telekinetic abilities.[citation needed]

Illusions: Sprite is extraordinarily skilled in the use of illusions. His illusions affect all five senses and are virtually indistinguishable from the 'real thing'. He is considered a Class 5 of 5 Eternal when it comes to his skill at illusion-casting.[2] After centuries of practice, Sprite's illusion powers transcended typical illusions, which allows him to alter perceptions of reality and people's memories to a significant degree.[4]

Telekinesis: He can mentally move and manipulate objects, living creatures, and fly.[citation needed]

Flight: Sprite can fly at high speeds through telekinesis.[citation needed]

Cosmic Energy Projection: Sprite is able to project blasts of cosmic energy in the form of light, heat, or concussive force. His entire head often glows while using his powers.[citation needed]

Matter Transmutation: Sprite is able to transmute nearly any item or being into almost whatever he wishes. His matter-manipulating abilities are nearly equal to Sersi's.[2]

Like this? Let us know!
Retrieved from "https://marvel.fandom.com/wiki/Sprite_(Earth-616)?oldid=6559945"
Community content is available under CC-BY-SA unless otherwise noted.