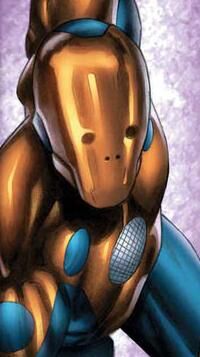 The original Spymaster and leader of the Espionage Elite was a formidable opponent for Iron Man, and successfully infiltrated Stark Industries on more than one occasion. He also also eluded capture from the Golden Avenger numerous times. After his operative Mark Sharen was killed by the Ghost while using the Spymaster identity, the original Spymaster let the world believe he had died. Others have attempted to assume his mantle as Spymaster.

Years later he returned to action after being found by Norman Osborn,[3] but quickly returned to the shadows. He owned a super-villain club and when the Avengers left Earth in order to battle the Builders, he gathered a group of super-villains to steal Iron Man's technology from the almost-defenseless Stark Tower.[4]

Once in Stark Tower, Spymaster used teleporter discs to teleport some Iron Man Armors to his buyers, but he escaped and left the rest of his accomplices to be discovered by the heroes which were using the tower as a base. They managed to defeat the heroes, and they were offered to be taken to Spymaster by Titanium Man. When they arrived to a spaceship where Spymaster was, they were ambushed by him and Titanium Man, who revealed himself as Captain Atlas of the Kree, the buyer.[5]

They managed to escape custody and started fighting Spymaster, Titanium Man and the army of Iron Men, controlled by the former. The actual Iron Man arrived to the spaceship, after having tracked down the armors, and fought Spymaster and Titanium Man along with the other villains confronting Spymaster. During the fight, Blizzard used the powers he discovered of being like a human battery to overcharge the Hulkbuster armor Spymaster was using and make it fly away and explode.[6]

Normal, although enhanced by his uniform

Like this? Let us know!
Retrieved from "https://marvel.fandom.com/wiki/Spymaster_(Ted_Calloway)_(Earth-616)?oldid=6118564"
Community content is available under CC-BY-SA unless otherwise noted.