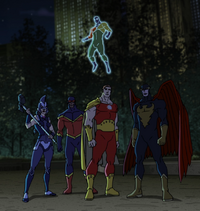 Base of Operations
The Citadel
Affiliations

The Squadron Supreme consisted of Hyperion, Princess Power, Nighthawk, Speed Demon, Doctor Spectrum, and Nuke. Being partially responsible for the chaos enveloping their world, they chose to take control of the planet to solve its problems. As such they took active responsibility for more than just fighting crime and supervillains and took on poverty and hunger, the environment and public health.

It was believed all but Hyperion were killed when the planet was destroyed in a civil war.[1]

Nighthawk appears on Earth and uses S.H.I.E.L.D.'s contingency plan on the Avengers. When Falcon is his captive, Nighthawk mentioned that he is the "architect" of the Squadron Supreme while Hyperion was the "hammer" of the group. It was also mentioned that the rest of the Squadron Supreme are heading to Earth. At the end of the episode, Hyperion springs Nighthawk from his cell on the Tricarrier. They both leave to get their team back together. [2]

Using the Reality Gem, Dr. Spectrum alters reality so the Avengers are all criminals with darker costumes and the Avengers Tower is headquarters of the Squadron. Due to a spike in energy, Iron Man sees the real reality and manages to convince his team to come together. However Spectrum has created a machine that will give him complete control over reality, and plans to alter history so the Avengers were never born. Captain is able to get a hold of the stone and revert reality back to normal. The Squadron leaves with Nighthawk activating charges placed at the base of Avengers tower. The Avengers manage to prevent the structure from falling onto New York in time for J.A.R.V.I.S. to activate the repair systems.[3]

The Squadron Supreme's fastest member Speed Demon was on the loose and wreaking havoc throughout Avengers Tower. Hulk must save the day by fighting the high velocity villain.[5]

Thor became convinced that Zarda wanted to defect from Squadron Supreme, but Hulk knew better and tried to protect Thor from Zarda's duplicitous ways. Zarda amplified the zoo animals in order to get close to the Avengers claiming that she was trying to switch sides. When Thor found Zarda on her island, she put him through her training process. Unbeknownst to Thor, their training was causing tidal waves that threatened Manhattan. When Hulk arrived upon hitching a ride on Mjolnir, he tried to help Thor only to be amplified into a monstrous form by Zarda. Thor managed to help Hulk regain control as he regresses back to normal. Upon the arrival of the other Avengers, Zarda escaped. Upon meeting up with Nighthawk, Zarda told him that she was wrong about swaying a member of the Avengers to their side.[6]

The Avengers were challenged by the fully formed and incredibly powerful Squadron Supreme for a battle that would end with only one team as the victor.[7]

The Squadron Supreme had taken over Earth where they managed to thwart Atlanteans on Attuma's side, shackle Red Hulk, trap Doctor Strange in a special trap, and keep Spider-Man occupied with one of their robots. Unbeknownst to the Squadron and the rest of the world, the Avengers are in hiding and working on a plan to save the planet and stop the Squadron Supreme once and for all. The Avengers pull a surprise attack on the Squadron Supreme that not even Nighthawk is prepared for. In desperation as part of his contingency plan, he has Hyperion absorb Nuke's powers and orders him to destroy the planet by blowing up it's core.[8]

Retrieved from "https://marvel.fandom.com/wiki/Squadron_Supreme_(Earth-12041)?oldid=5611450"
Community content is available under CC-BY-SA unless otherwise noted.