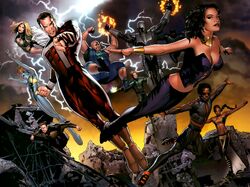 The Squadron Supreme was formed when the U.S. government recruited both current (eg. Hyperion) and new (eg. Amphibian) superhumans to carry out missions on its behalf. While some of the team's missions are international in scope and have a "positive public relations" aspect, others are covert and apparently involve military strikes and assassinations.

The team's first mission involved traveling to Africa, to neutralize an African general named John M'Butu, whose voice can compel obedience. The general, however, is actually executed by a group of African superhumans who told the Squadron to leave, stating that "Africa is now off-limits". The team then traveled to the Ilam Province in Iran, where they have been ordered to stop a group of insurgents. Hyperion quelled the doubts of comrade The Blur about their agenda by showing him a mass grave filled with the bodies of innocents. After this mission the Blur asked the vigilante Nighthawk to join the Squadron, but Nighthawk refused.[1]

Shortly after this, Hyperion engaged in a public battle with a super-powered serial killer named Michael Redstone, who was previously captured by Hyperion, the Blur and Nighthawk.[2] Unfortunately, the battle resulted in the deaths of several innocent bystanders, and Redstone then attempted to blackmail Hyperion with a nuclear device, although teammate Zarda apparently deals with the bomb. The Blur and Nighthawk then joined Hyperion for the final confrontation with Redstone.

Eventually the original Squadron Supreme came into conflict with their new successors. However, the heroes then united to stop a group of superhuman terrorists from the Middle East but then, via a government device, apparently all lose their abilities.

The Squadron Supreme confronted Earth-616's Cabal during an incursion and perished in combat right before their Earth was destroyed by the Cabal, so theirs could live.[4]

Retrieved from "https://marvel.fandom.com/wiki/Squadron_Supreme_(Earth-31916)?oldid=5551262"
Community content is available under CC-BY-SA unless otherwise noted.