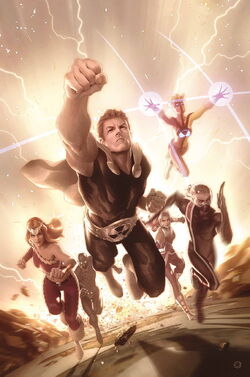 Agreed, however... if we must overcome one group or every group of Avengers, I'm convinced we have the power, the commitment and the resilience... so that our Squadron will stand Supreme.

The Squadron Supreme was formed by members of various superhuman groups from different realities, all of whom had lost their own world because of the incursions. They all found themselves on Earth-616, and decided to band together to protect their new home at any cost.[1]

Their first mission was to punish Namor for destroying Doctor Spectrum's world and cooperating with the Cabal, as well as numerous attacks upon the surface world. They rationalised this by claiming that Namor and Atlantis were a threat to the rest of the world. They eventually confront him, along with Attuma and the rest of Atlantis. Zarda killed Attuma, while Hyperion yanked the city of Atlantis from the ocean, lifted it high into the air, and hurled it down, utterly destroying it. Hyperion proceeded to decapitate Namor with his Atomic Vision.[2] These events led to the people of Earth having mixed reactions about them, and forcing the Avengers Unity Division to attempt to apprehend the Squadron Supreme;[3] however, they were unexpectedly rescued by Thundra and teleported to Weirdworld.[4] When on Weirdworld, the Squadron Supreme were separated where they end up encountering a resurrected Doctor Druid.[5]

Doctor Druid had taken over Weirdworld through the use of a crystal that allowed him to control the minds of everyone on Weirdworld. The Squadron, with the help of Thundra, managed to destroy the mission and return home. During the mission, Power-Princess revealed her true identity to be Warrior Woman, formerly a member of the Squadron Sinister. Warrior Woman had allied with Doctor Druid, and when he was defeated, fled, leaving the group. They were instead joined by Thundra, who decided to accompany them back to Earth, not sure if she needed to help the Squadron protect the world or protect the world from the Squadron.[6]

Like this? Let us know!
Retrieved from "https://marvel.fandom.com/wiki/Squadron_Supreme_(Earth-616)?oldid=6448344"
Community content is available under CC-BY-SA unless otherwise noted.