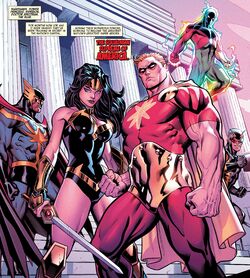 The Squadron Supreme of America was a team of superheroes created by the demon Mephisto and programmed by the Power Elite to act as the United States of America's first line of defense, a role that once belonged to the Avengers. Phil Coulson acted as their liaison.[1]

The Squadron Supreme of America first appeared when Phil Coulson promoted them to Thunderbolt Ross as the United States of America's sanctioned superhero team.[2] The Squadron then confronted different radical groups like King Namor's Defenders of the Deep.[3]

When Malekith the Accursed attacked Earth during the War of the Realms, the Squadron Supreme of America were summoned when Frost Giants from the realm of Jotunheim invaded Washington, D.C.. The Squadron routed the invaders out of the American frontier in Lake Erie, and were subsequently sent to Ohio.[1]

Like this? Let us know!
Retrieved from "https://marvel.fandom.com/wiki/Squadron_Supreme_of_America_(Earth-616)?oldid=5577685"
Community content is available under CC-BY-SA unless otherwise noted.