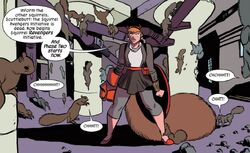 Originally, the Avengers Squirrel Initiative was created by Allene as a means of proactively making the world a better place through environmental efforts, humanitarian aid, and non-intrusive squirrel-based surveillance monitoring. However, after the untimely death of Chompsky, Allene became disenchanted with humanity. Without Doreen's moral compass, Allene chose to use her powers to rid the Earth of humans (and humanoids) and make squirrels the dominate species. Allene used the High Evolutionary's duplication chamber to clone an army of approximately 62,000 squirrels.[1]

Together, Allene and her duplicate squirrel army destroyed the country's electrical grid and then systematically defeated nearly all of the heroes and villains of the Marvel Universe. Although their plans nearly succeeded, they were thwarted by Squirrel Girl, Tippy-Toe, and their friends.[1]

As part of a compromise, Allene and her duplicate squirrel army were sent to the Negative Zone to explore, battle villains, and found a squirrel utopia.[1]

Retrieved from "https://marvel.fandom.com/wiki/Squirrel_Avengers_Initiative_(Earth-616)?oldid=5551270"
Community content is available under CC-BY-SA unless otherwise noted.