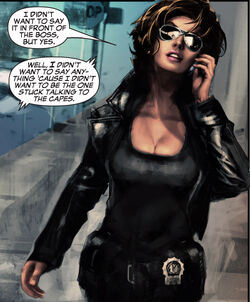 The daughter of New York City police captain Arthur Dolan. Stacy grew up the childhood friends of Danny and Barbara Ketch and Jack D'Auria. As they grew older Stacy and Dan developed a romantic relationship. Stacy had aspirations to become a police officer like her father. Her life changed when she found out that Dan was in the hospital and his sister was in a coma. All she knew was they witnessed a murder and the sole suspect was the Ghost Rider. After that night Stacy noticed a pattern as familiar neighborhood faces had been murdered. Ghost Rider was involved in some way but she had not realized to what extent.[1]

One night after graduating from the police academy Stacy went to visit Barbara at her grave. To her surprise she found Ghost Rider paying his respects to her friend. Confused she confronted Ghost Rider and realized he did not want to hurt her or anyone. These instincts proved valid when Scarecrow kidnapped Stacy believing her to be his mother. She was rescued by Ghost Rider and Captain America.[2]

Stacy teamed up with Ghost Rider and the Midnight Sons during the event known as the Siege of Darkness where she acted as an unofficial representative of the NYPD and worked in conjunction with the Midnight Sons to help stop the growing threats of Lilith and Zarathos. It was during this battle that she discovered Dan was indeed the Ghost Rider.

Stacy was concerned that Daniel was being entirely consumed by the Ghost Rider persona. She volunteered for the police task force assigned to capture the Ghost Rider and received extensive S.H.I.E.L.D. training as a result. She saw it as an effort to rescue Daniel from himself. When the task force had succeeded in capturing Ghost Rider it was only then that Stacy realized her true mistake. Ghost Rider did manage to escape, but the events led to a tumultuous relationship.[3]

Stacy's knowledge of the secret identity of her lover were wiped clean by Jennifer Kale, supposedly to protect Stacy from Ghost Rider's enemies. As Stacy maintained no memory of what she did in the past, she was free to restart her relationship anew.

Dolan and her partner, Detective Brett Mahoney were tasked with solving the murder of a John Doe, despite the fact that he was left unidentifiable by any earthly means, and that his death was witnessed by the Watcher.[4] They located a witness who placed Jaafar Yoosuf at the scene. Dolan had arrested Yoosuf months earlier for trying to buy superpowers. Her investigation lead to Yoosuf's apartment where she Dolan was shot by one of her own police officers. The investigation was turned upside down when ballistics showed the bullets in John Doe came from her gun. After her arrest, she survived a failed assassination attempt by Dominic Fortune.[5]

Dolan discovered that Fortune was a member of a black ops team Vanguard, and convinced them of her innocence by exposing Yoosuf as a villain with the ability to possess the minds of others. When she captured Yoosuf, he was killed by Blade.[6] The John Doe arrived at their facility to reveal that he was a former Vanguard member, Trenton Craft known as Colonel America, and that his telekinetic powers allowed him to survive his murder and autopsy. Unfortunately, he had to destroy Dolan and the entire team roster to preserve the secret identity of Vanguard.[7]

The Vanguard members survived thanks to the intervention of Retcon, whose powers allowed her to make Craft think he had killed them, forcing the rest of them to go into hiding. Later, Dolan snuck into the apartment of her former partner, Mahoney, to give him a written account of the investigation. She warned him that after reading it, he would realize he can't tell anybody, but she didn't want to possibly die without sharing the truth with someone.[8]

Like this? Let us know!
Retrieved from "https://marvel.fandom.com/wiki/Stacy_Dolan_(Earth-616)?oldid=6520635"
Community content is available under CC-BY-SA unless otherwise noted.