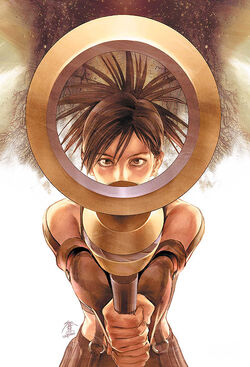 When blood is shed... Let The Staff of One emerge--

The Staff of One was a magical object so powerful that, according to Tina Minoru, it made even the likes of Dormammu tremble.[13]

The Staff was formed after Tokiko Minoru bested the magical entity known as the One with a thrall army twice the size of the One's. After her victory, she presented the One with a choice: to die or to become "her sword." He chose the latter and, upon agreeing on the terms, became the Staff, being allowed a few hours of freedom every time Mars aligns with the Earth and the Sun.[11]

The Staff was passed through generations and Tina Minoru received the Staff of One from Judy Minoru, who gave her a speech about the rules and conditions of using the Staff, like it had been done across the centuries.[11]

When attempting to bring their children back, Tina attacked Nico with the Staff, but instead of wounding her, the Staff was absorbed into her body.[3] Nico accessed the Staff later after accidentally being cut by Dale Yorkes' Samurai Battle-Axe.[13] Since that time, Nico has learned how to use the Staff and has become proficient with it.[13][14]

When Alex Wilder revealed himself as the mole for the Pride, he briefly took control of the Staff of One along with the Fistigons, X-Ray Specs, and Old Lace.[14]

When Chase Stein left to sacrifice himself to Gibborim, he also stole the Staff of One to give Nico a chance at a normal life.[15]

During their trip to 1907, Nico was abducted by the Upward Path and the Witchbreaker, her ancestor. Witchbreaker pushed Nico's powers to the limits, and after their encounter, the Staff of One took on a new appearance and seemed to have imbued Nico with new powers.[16] Following this increase in power, Nico's abilities expanded nearly beyond her control, and the Staff of One began attacking others trying to take possession of it.[9]

The Staff of One was brought with Nico when she, Chase, and fourteen other super-powered adolescents were abducted and brought to Murderworld by Arcade.[17] Because of her magical-based abilities, Nico was chosen to face off against Apex. Unfortunately, Apex badly beat Nico, and, while controlling Chase's Darkhawk armor, forced Chase to break off her left forearm and snap the Staff of One in two. With her dying breath, Nico cast one last spell. Powered by her tremendous loss of blood, the spell resurrected her, created a new magical arm for her, and reformed the Staff of One.[18][19]

After her resurrection, Nico appeared darker and more distance. Additionally, her new magical arm acted as a surrogate for the Staff allowing her to cast spells using the Staff's power without bleeding and without the Staff being physical present.[20] Nico later mysteriously regained her flesh and blood arm, and the Staff of One returned to its original appearance,[21] following an encounter with the One that Nico slept through.[11]

The Staff of One is powered by blood magic. To conjure and operate the Staff, a blood offering must be made. This bleeding can be from a wound, a small cut,[13] and even from menstruation[22] or bleeding gums.[23] The amount of magic the Staff can perform appears to be tied to the amount of blood offered, that is to say, the larger the sacrifice, the more potent the spell.[18][19] Other factors that appear to affect the spell casting is the clarity and/or intent.[14][8][24][6][25][26] Alex Wilder once observed that the Staff of One was harder to operate than it appeared.[14]

To cast spells, the user simply needs to utter a word or simple phrase; however, the Staff of One can only cast a spell once. Attempts to cast a spell a second time result in unpredictable feats of magic,[27][28][29] or have no resulting effect whatsoever;[30] however, the Staff recognizes different masters, so the same spell can be cast more than once, as long as it's by different users.[31]

When the strength of the Staff begins to wane, it is reabsorbed into the wielder's body until they bleed to bring it forth again.[13][27][32] This process can often be unpleasant.[1]

The Staff of One appears to have an affinity for certain individuals,[35][19] particularly the women of Tokiko Minoru's bloodline,[11] but it appears that the Staff can be wielded by anyone;[14][6][36][19] however, since its power upgrade with the Witchbreaker, the Staff appears to have become more discriminating about who can wield it.[9]

When the Staff of One is especially powerful and/or closely linked to its bearer, it appears to grant self-propelled flight without the need of an incantation.[16][37][19][38]

During the most recent visit of the One, Nico renegotiated the One's contract; now, instead of exchanging blood for magic, every spell will allow one drop of the One into Nico, allowing him to hear the outside world and have a small voice.[11]

Not all of Staff of One's incantation are seen on-panel or on-screen. Here are the spells seen or mentioned with unknown incantations.

Like this? Let us know!
Retrieved from "https://marvel.fandom.com/wiki/Staff_of_One?oldid=6447845"
Community content is available under CC-BY-SA unless otherwise noted.