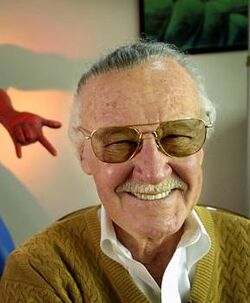 Stanley Martin Lieber (he would later change his name to Stan Lee) was born on December 28, 1922, to Celia and Jack Lieber. His ancestry is Ashkenazi Jewish. The first issue that Stan Lee ever wrote was Captain America Comics #3.

Stanley Lieber arrived at Marvel when Martin Goodman hired him. Stan was originally an assistant for Joe Simon and Jack Kirby, and wrote a written story for Captain America Comics Vol 1 3, but changed his name to 'Stan Lee' as he didn't want his name on comic books. He wanted to be a book writer, and not have his name published on comics - something society looked down on back then. He eventually lead to create superheroes like The Destroyer, became Editor-in-Chief and led the company through its worst times.

Like this? Let us know!
Retrieved from "https://marvel.fandom.com/wiki/Stan_Lee?oldid=6550824"
Community content is available under CC-BY-SA unless otherwise noted.