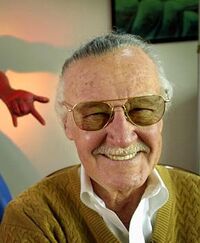 Stanley Martin Lieber (he would later change his name to Stan Lee) was born on December 28, 1922, to Celia and Jack Lieber. His ancestry is Ashkenazic Jewish. The first issue that Stan Lee ever wrote was Captain America Comics #3.

Retrieved from "https://marvel.fandom.com/wiki/Stan_Lee_(Earth-1218)?oldid=5284814"
Community content is available under CC-BY-SA unless otherwise noted.