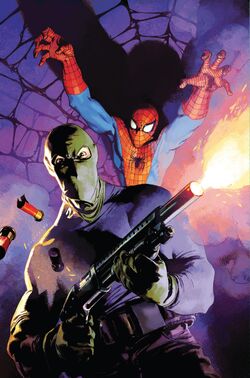 I deserve this. All the people I hurt--what I did to them. I deserve to be punished. To suffer. But the truth is... I've never felt more free.

Stanley Carter's parents were drug addicts who became romantically involved with one another. Stanley's father later died, leaving Stanley's mother pregnant and alone. Stanley's mother was sent to a rehabilitation clinic and Stanley went to be raised by his grandparents in the Ozark Mountains. Stanley's grandfather was a zealous pastor who reviled his son and took it out on Stanley. After Stanley's grandfather died due to a rattler bite, his congregation held a sin-eating ritual for him, and young Stanley presumably saw a sin-eater, a masked hermit who would eat fruit placed in a corpse's body to take the dead's sins for himself. Stanley felt a kinship with the sin-eater, since he believed himself to carry the burden of his father's sins. When the sin-eater looked back at Stanley, the young boy felt like he had been marked. A few weeks later, Stanley's mother came and retrieved her son so that she could raise him in Nrw York City.[1]

As an adult, Stanley became a S.H.I.E.L.D. agent. Stanley volunteered for an experimental drug, developed by S.H.I.E.L.D. R&D basing on phencyclidine and aimed to increase strength and stamina. The project was interrupted because it was considered too dangerous, and Carter, who considered this an affront and an abuse of authority, violently resigned. There were no traces of drugs in his system, being totally purified, but nevertheless the drugs had already driven him crazy.[2]

Carter then joined the NYPD and became a detective.[2] When his partner dabbled in drug trafficking and Carter discovered this, Stan murdered him in cold blood. However, he repressed the episode, becoming convinced that his partner had instead died in a shoot-out.[3] Stanley went on a crusade to find the drug pushers suspected for the murder and executed them.[1] This unchained in Stanley an obsession to destroy people who abused their authority and thus "sinned." He decided to "absorb the sins of the world". He wanted to purge evildoers from a society where nobody else could punish them. He bought a shotgun and clothes to improvise a costume and became the Sin-Eater.[2]

The Sin-Eater's first victim was his own lover, police captain Jean DeWolff, whose death attracted attention throughout all New York City — including DeWolff's friend Spider-Man. The Sin-Eater had stolen DeWolff's purse, creating a precedent of taking one personal object from each of the victims. The object should be "associated" with the victim's sins.[4]

Ironically, Carter was assigned the task to find DeWolff's murderer and work with Spider-Man.[4]

The Sin-Eater then murdered Judge Horace Rosenthal, who was a friend of Matt Murdock, blind lawyer and secretly masked crimefighter Daredevil. While leaving the crime scene, the Sin-Eater met Spider-Man and shot him, accidentally killing an innocent bystander. Spider-Man found his own aunt May Parker in the alarmed crowd, so he had to stop and confirm she was all right. In the confusion, the Sin-Eater escaped.[5]

The Sin-Eater's third victim was Bernard Finn, an African-American priest. This led to a great public protest against the Sin-Eater.[5]

The Sin-Eater then entered the Daily Bugle looking for J. Jonah Jameson. Joe Robertson pretended to be Jameson, to attract the Sin-Eater's attention so he would free his hostage. The Sin-Eater aimed at Robertson but Peter Parker (who was really Spider-Man) knocked him out using surprise. The Sin-Eater was captured and then unmasked to reveal Emil Gregg, Carter's neighbor. An unbalanced person, Gregg had overheard Carter planning the murders from the thin walls, and he thought he was hearing "inner voices" ordering him to murder Jameson.[6]

Daredevil and Spider-Man found the Sin-Eater in Jameson's home and stopped him in time to save Betty Brant-Leeds, Jameson's secretary who was there visiting Jameson's wife Marla (both Jameson and Betty's husband Ned were away on a business trip). Spider-Man felt that Carter had betrayed him personally and beat him, but Daredevil stopped him before he could kill Carter.[2]

Carter was sent to jail and judged, but he was found not guilty due to madness and sent to a mental hospital. However, a mob believed that the police had been working along with Carter, "one of their own", to protect him. The fact that Carter would not even go to jail was also an offense to them. Daredevil opposed the mob, believing that everybody deserved a fair judgement, while Spider-Man initially refused to join Daredevil because he was too angry with Carter. Eventually, Daredevil convinced Spider-Man to help him, and Carter was safely transported to a high-security hospital.[2]

In the hospital, Carter was partially cured. The Sin-Eater's personality was completely separated from Carter's, so that only one of the personalities could control the body. When freed, Carter needed to fight the Sin-Eater constantly.[citation needed]

The Sin-Eater eventually triumphed and became a threat again. Surrounded by S.W.A.T., he took a boy as a hostage, aiming at him with his weapon. S.W.A.T. shot the Sin-Eater, killing him. However, when they examined the corpse, they discovered that the Sin-Eater's weapon was unloaded — Carter had partially succeeded.[citation needed]

While being punished in Hell for his sins,[1] Carter was resurrected by Kindred, a demonic entity bent on getting revenge on Spider-Man.[7] Under the directions of Kindred, Stan began a vicious crusade against criminals, going after supervillains such as Overdrive[8] and the Lethal Legion.[9] Kindred granted the Sin-Eater an enchanted shotgun that granted him the ability to absorb the wickedness of the criminals he shot down as well as their powers, with his victims returning to life with a new-found sense of remorse. Spider-Man would attempt to stop the Sin-Eater's targeting of both Overdrive and the Lethal Legion to no avail. The Sin-Eater's brutal vigilantism and apparent execution of his victims earned him approval from the public.[10]

When reporter Norah Winters investigated the criminals' change of heart, she was approached by Carter for an interview in which he encouraged the public to join his cause to cleanse the world of sin.[11] The Sin-Eater quickly amassed a large following which began to storm the streets of Manhattan causing chaos, with most of his followers converging at Ravencroft Institute, the workplace of the Sin-Eater's next target, Norman Osborn. Spider-Man intervened again to save Osborn, resulting in both nemesis teaming-up to fend off the Sin-Eater's followers, with Osborn returning to his mantle of the Green Goblin.[12] Absorbing the powers of the Juggernaut, Carter went after Spider-Man and the Green Goblin in the underground tunnels of Ravencroft. They sunk the Sin-Eater in liquefied concrete to hold him up while they fled on an escape pod, accompanied by Spider-Man's allies, the Order of the Web. However, after taunting Spider-Man to the breaking point, Osborn was thrown out of the vessel to the Sin-Eater's mercy.[13]

Once Carter caught up with Osborn and shot him down, Kindred confronted Stanley about his repressed sin, causing him to break down after remembering that he was responsible for his police partner's death. The sins Stanley had absorbed took shape as evil spirits and attacked him before leaving possess the Order of the Web, corrupting them into savage monsters that went to wreck havoc in the city.[3] The remainder of Carter's followers found him in the basement of Ravencroft and took him back to their base. Believing that Kindred's forsaking of him was a test, the Sin-Eater set out to hunt down the corrupt Order of the Web.[14] Obtaining samples of the Spider-Virus, Carter forced it on his remaining followers to lure Morlun, a hunter of spider-totems.[15] The Sin-Eater managed to shoot Morlun with his enchanted shotgun, obtaining his powers.[16] Despite the fact that the Order of the Web had already been freed of Kindred's corruption, the Sin-Eater confronted them and managed to overpower them. During the battle, Madame Web let herself be shot down by the Sin-Eater. He absorbed her psychic powers, causing him to see a vision of Kindred's concurrent encounter with Spider-Man. Overwhelmed by the shock that Kindred had manipulated him and was seemingly fraternizing with Spider-Man, Carter took his own life with his shotgun.[17]

Carter was a good fighter, knowledgeable in martial arts and in guns, particularly shotguns. He was also a good detective and law enforcer.

The Sin-Eater possesses the normal human strength of a man of his age, height, and build who engages in moderate regular exercise.

Like this? Let us know!
Retrieved from "https://marvel.fandom.com/wiki/Stanley_Carter_(Earth-616)?oldid=6401956"
Community content is available under CC-BY-SA unless otherwise noted.