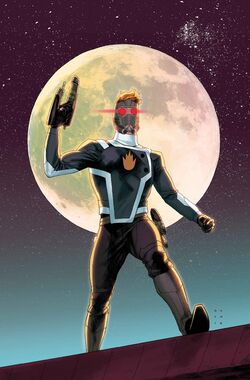 The Star-Lord Armor allows the wearer to survive in the absolute zero, vacuuum of space. The suit is able to travel through space under its own power. The suit provides the wearer a personal energy shield for protection.[citation needed]

On Earth-199999, Star-Lord possesses a helmet capable of retracting down into a removable earpiece. The helmet allows for users to survive in the vacuum of space providing both an oxygen supply and pressure support. The helmet also provides various detailed visual displays.[1]

On Earth-TRN562, the Star-Lord Armor was created in response to Star-Lord joining the Avengers Academy. Star-Lord asked Wasp to create an outfit that would grant him respect from his fellow students. She designed the suit to look like a uniform and have a "mean-looking helmet."[2]

Like this? Let us know!
Retrieved from "https://marvel.fandom.com/wiki/Star-Lord_Armor?oldid=6480445"
Community content is available under CC-BY-SA unless otherwise noted.