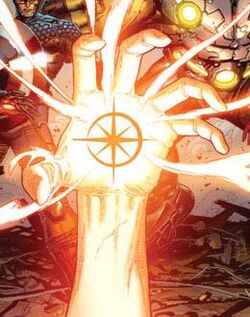 A brand granting the bearer infinite power, limited in application only by their imagination. Though it exists on several different worlds and takes slightly different forms on each, it always resembles a multi-point star burst. First known in the New Universe, where it was wielded for years by the mysterious figure known only as "the Old Man", who had possessed the brand since the Middle Ages.[citation needed]

Tired of immortality, the Old Man at one point attempted to bond the brand to an asteroid, getting rid of it without passing on the burden of its awesome power. He failed, and the energy released resulted in the White Event. Giving up, the Old Man gave the brand to Ken Connell. Ken Connell used the star brand to become a superhero for a time, before he too grew tired of fighting off aliens, super beings, and even a now-mad Old Man, who all also wanted the brand.[citation needed]

He too tried to fly into space and disposing of the brand's power (unaware that that's what caused the White Event), saving just a small portion of its infinite power to bring him safely home. He did not fly far enough away from the Earth, and the resulting blast completely destroyed Pittsburgh, leaving only a mutative, radioactive pit. This later became known as the Black Event, and led to a global war when President Reagan assumed it to be an act of hostility by the Soviet Union.[citation needed]

On Earth-886 the bearer of the Star Brand uses it to fight evil monstrous forces that threaten the world, and she is something of a celebrity for doing so. The bearer of Earth-723's Star Brand, uses the power to create music that can influence human behavior, to the extent that he has unified the people of his world as single hive mind. Earth-541 is the home of a Star Brand bearer who has conquered his world and installed himself as the head of a benevolent monarchical dictatorship. This world is apparently peaceful, happy and efficient, despite the lack of freedoms.[citation needed]

Arden, a multiversal observer of the New Universal continuum theorizes that while every Star Brand ever conceived is different everywhere and everywhen within existence, the one constant they all share besides being a conduit for an energy source no matter what universe it's in. Is that none of them adhere to the natural physics of said universe, that all are tacking into a looping energy source which is derived through the multiverse itself.[2]

The asteroid bearing the power of the Starbrand was called to Earth 66 million years before the present, with the ensuing impact causing a mass extinction event that wiped out the majority of life on the planet, including the dinosaurs. The Starbrand transferred to a Tyrannosaurus rex, which used its power to defend the planet from those who would threaten it. In time the Tyrannosaurus rex perished and a mystical oasis called the Garden grew over its resting place. 65 million years later, the Garden was destroyed when the Star Brand claimed the prehistoric human Vnn as its second host.[1]

Eventually, the hero Quasar came to the New Universe while lost on a trek through alternate realities. Ken Connell had passed the brand on to a U.S. Air Force Pilot, who Quasar found and convinced to give him the brand. He used its power to return to Earth-616, but he accidentally brought Earth-148611 with him.[citation needed]

After a conflict between warring factions vying for control of the brand, the Living Tribunal declared the brand to be a threat to the universal order. He then sealed Earth-148611 behind an impenetrable barrier, so that the brand could never interact with the rest of the universe.[citation needed]

Like this? Let us know!
Retrieved from "https://marvel.fandom.com/wiki/Star_Brand_(Object)?oldid=6433305"
Community content is available under CC-BY-SA unless otherwise noted.