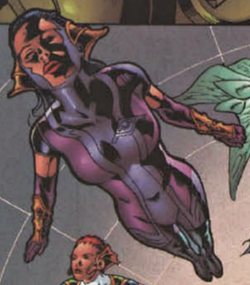 Star Splendor was among the 18th Kree Diplomatic Gestalt, spreading the way of the Kree across the Multiverse, aboard The Marvel, along with her son Noh-Varr and her son's father Captain Glory.

At some point, she stole the Pocket Battlefield from the Pink Pantheon after the Matter Fax malfunctioned and cloned the entire Macroverse. It was stored in the archive of the Marvel.[4]

During his missions, she participated to the negotiations in the Kree-Skrull conflict, and was projected along his teammates into the

Pocket Battlefield: Noh-Varr's second most used device is called the Pocket Battlefield. It appeared as a pink square which would expand and take in anyone in the area. The battlefield is able to be one of 9 different settings each having its own physics. Noh-Varr explained to Lyra that while in the Battlefield, he controls all ten of its axis. It shifts whoever enters it into a pocket dimension with its own specialized physics.

She wasn't ever named, but her name can be deduced:

Like this? Let us know!
Retrieved from "https://marvel.fandom.com/wiki/Star_Splendor_(Earth-200080)?oldid=6447863"
Community content is available under CC-BY-SA unless otherwise noted.