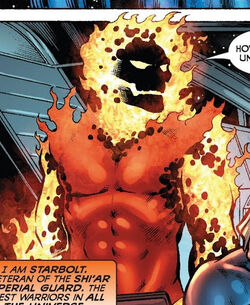 Starbolt was a firmly dedicated member of the Shi'ar Imperial Guard. The process which gave him flame powers altered his physiology to the point where a mate and children were impossible goals for him, leaving his duty to the guard as his sole drive in life.[1]

Starbolt first met the mutants of Earth when defending the M'kraan Crystal at the order of his emperor, D'Ken.[2] He was later part of the Imperial Guard unit engaged in ritual combat with the X-Men for the death of the Phoenix.[3]

When the X-Men were framed for imperial crimes, Nightcrawler and Shadowcat were held as captives by the Shi'ar. They tried to reason with Gladiator and Oracle. But Starbolt, for one, didn't trust the mutants' story. The issue became moot when Deathbird's Borderers tipped their hand and attacked Starbolt and the other Guardsmen.[4]

Nevertheless, Deathbird became the Majestrix of the Shi'ar after that. Starbolt served her and the Guard in the search for the Phalkon.[5]

He was later one of the numerous Imperial Guard casualties during their attack on the Cancerverse through the Fault and was killed by the Ex-Men in an ambush. They were all later destroyed by Gladiator.[6]

His body is composed of an unknown form of energy that resembles fire. He has the ability to fire bolts of energy from his hands.[7]

Like this? Let us know!
Retrieved from "https://marvel.fandom.com/wiki/Starbolt_(Earth-616)?oldid=6443460"
Community content is available under CC-BY-SA unless otherwise noted.