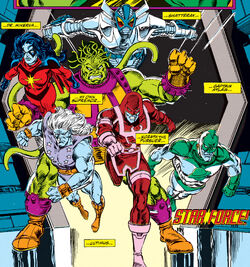 Base of Operations
Hala
Affiliations

The Supreme Intelligence orchestrated the Kree-Shi'ar War in another attempt to jumpstart its races evolution. The Intelligence's goal was to have the Shi'ar activate a Nega-bomb over the Kree Homeworld of Hala. It knew that while the vast majority of its population would die in the explosion, the remaining Kree's DNA would be altered thus allowing for its evolutionary growth. To help in its goals it recruited various Kree from the empire and formed the team that would come to be known as Starforce.[2] The Avengers met with Lilandra in an attempt to end the war. After being assaulted by Starforce, she agreed to pursue a truce and recall the Negabomb.[3]

When the war ended, the Shi'ar annexed Kree territory and placed Deathbird as its regent, with Starforce as her Imperial Guard.[1]

Retrieved from "https://marvel.fandom.com/wiki/Starforce_(Earth-616)?oldid=5575110"
Community content is available under CC-BY-SA unless otherwise noted.