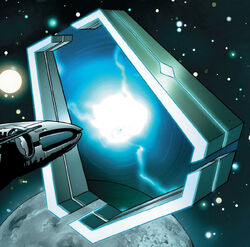 Shi'ar have a network of devices known as Stargates. They were used to create stable Wormholes. These were used by the Shi'ar Empire to travel around the universe. Sometimes they were ground-based gates for people to walk through, other times they were enormous space-based ones for ships to use.[1][2] Stargates or a version of the standard stargate, had the ability to provide travel to other dimensions.[3]

The technology of the Stargate worked by having near-infinite amounts of energy bound in a delicately-balanced matrix field. It was when the Stargate was in operation that it was most vulnerable. If the transit screen was hit with enough firepower, the stargate would explode in a massive explosion that could be seen far.[3]

Like this? Let us know!
Retrieved from "https://marvel.fandom.com/wiki/Stargate?oldid=6437862"
Community content is available under CC-BY-SA unless otherwise noted.