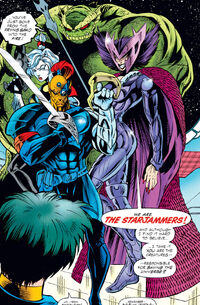 The Starjammers consisted of slaves who had broken free during the reign of Emperor D'Ken. They included earthman Christopher Summers, Ch'od, Hepzibah and Raza Longknife. Early on in their time together, Christopher was infected with a Brood embryo and returned to Earth[1].

When D'Ken attempted to eliminate his two sisters Lilandra and Deathbird, he would only succeed in slaying Lilandra. Deathbird escaped and joined with the Starjammers[2]. When the X-Ternals arrived in the Shi'ar galaxy, the Starjammers saved them from the crystallization wave caused by the destabilized M'Kraan Crystal[3].

Retrieved from "https://marvel.fandom.com/wiki/Starjammers_(Earth-295)?oldid=5254174"
Community content is available under CC-BY-SA unless otherwise noted.