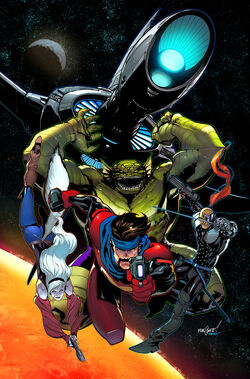 Allies
New Mutants, X-Men, Guardians of the Galaxy, Past X-Men

Origin
Formed in the Shi'ar slave pits while prisoners of the Emperor D'Ken. Stole Starjammer ship and enact revenge on Shi'ar by pirating their ships.

The Starjammers were a group of renegade spacers who perform acts of piracy and sabotage in the tradition of old English buccaneers. The original Starjammers, Ch'od, Hepzibah, Raza, and their human leader Corsair met in the slave pits of the Shi'ar Empire. This was during the reign of D'Ken the Mad when atrocities of the Empire were many. When the four escaped and stole a starship, they swore vengeance on the tyrannical government that had enslaved them. They battled the empire aboard their ship, the Starjammer (of which they have at least two). Soon others joined the Starjammers to fight for freedom (and money). [1][2]

When D'Ken attempted to steal the power of the M'kraan Crystal, the Starjammers first met the X-Men (including Corsair's son, Scott). They teamed up to fight the Royal Elite Imperial Guard, who were protecting the insane emperor D'Ken. In a roundabout way, the Starjammers were responsible for putting Lilandra on the throne, and she stopped the Empire's attempts at capturing the Starjammers.[3]

When the X-Men came to Shi'ar space to stop Corsair's son Gabriel (also known as Vulcan) from slaughtering the Shi'ar, Corsair and the Starjammers agreed to help. Confronting Gabriel, who was poised to become emperor after killing D'Ken, Corsair ordered his child to stop the carnage. Bitterly declaring that he had no father, Gabriel murdered Corsair in cold blood. His place as leader of the Starjammers was then taken by his son, Alex. [4]

Alex led the Starjammers and the Shi'ar loyal to Lilandra to many victories over Vulcan. However, the Starjammers (save Rachel, Korvus and Lilandra) were eventually captured after battling a new interstellar threat claiming to have originally owned the M'Kraan Crystal.[5] The Starjammers were tortured repeatedly until they were freed by their comrades and escaped[6] into Kree Space, arriving just prior to the wedding of Crystal and Ronan the Accuser. Lorna Dane, considered family as she was believed to be the paternal aunt of Luna Maximoff, secured their passage.[7]

The Starjammers were present when the Imperial Guard sacked the wedding. They aided the Kree in their fight against Vulcan and the Shi'ar.[6]

When the Guardians of the Galaxy and the past X-Men tried to follow the Shi'ar, who had abducted the Jean Grey of the past to put her on trial for the crimes of the Phoenix, they were discovered and attacked. During the battle, they ran across the Starjammers, who saved them from the Shi'ar, and revealed to have a living Corsair back as their leader.[8]

Retrieved from "https://marvel.fandom.com/wiki/Starjammers_(Earth-616)?oldid=5722502"
Community content is available under CC-BY-SA unless otherwise noted.