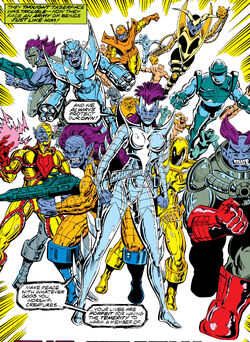 During the second invasion of Earth by the Martian Masters in 2001, Tony Stark (Iron Man) of Earth-691 launched an arsenal of technology into space, believing that it would be devastating for the Martians to possess such technology. The rocket carrying the technology slingshot past the sun, where it was accelerated by gravity and launched far beyond the Sol system. After an untold number of years, the rocket eventually crashed on an alien world, landing near a tribe of primitive blue- and purple-skinned aliens. After a few years, the tribe eventually overcame their fear of the crashed rocket, and investigated, finding a cache of Stark technology.[1]

Over the centuries the Stark would study and learn from the technology as they grew into an industrial civilization. The young race even went so far as to name their race and their planet after their new, iron-clad god. The Stark made it a point of pride to see that every member of their race possessed a custom suit of armor. For a time, the Stark lived a golden age of technological achievement, and erected a large golden statue of Tony Stark.[1][2]

The Stark were ravenous, however, and emulation of their idol eventually depleted the planet Stark of its resources. Their factories polluted the air, and eventually all Stark lived in artificial domes. The Stark soon began conquering other worlds for their resources, ruining them as they had ruined their own world. This eventually brought them into conflict with Guardians of the Galaxy.[3]

A council of matriarchs heading a militaristic hierarchy.

Though ravenous and ruthless in pursuing power and resources, the Stark are also governed by a system of tribal and personal honor. Names are considered a badge of honor, and to be stripped of ones name is considered the harshest punishment for failure. Stark society is matriarchal, and all military commanders and political leaders seem to be female. Stark warriors even remain somewhat reluctant to attack female opponents, and tend to "pull their punches" when doing so. The Stark worship Tony Stark as a god.

Like this? Let us know!
Retrieved from "https://marvel.fandom.com/wiki/Stark_(Race)?oldid=5382895"
Community content is available under CC-BY-SA unless otherwise noted.