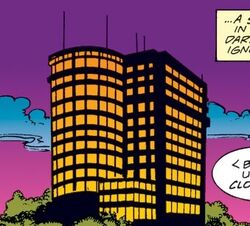 When industrialist billionaire Tony Stark started a new corporation named Stark Industries after his previous company's assets had been taken over by Obadiah Stane,[1] he relocate the corporation's headquarters in Silicon Valley, California.[2][3]

In a highly secured sub-basement lab complex, Tony Stark told his friend Jim Rhodes that his top security Iron Man system technology had been stolen and applied to Force.[4]

After beating up on Stingray, Stark was visited by S.H.I.E.L.D.'s Director Nick Fury, who was investigating on Iron Man's true identity.[5] It was eventually revealed that S.H.I.E.L.D. Executive Board had sent a Life-Model Decoy impersonating Nick Fury in order to try taking over Stark Enterprises.[6]

Tony and Rhodes neutralized here the Guardsmen's armors, before flying away to Stark's Malibu Mansion.[8] They later gathered back to savor Iron Man's latest victory against Titanium Man, where Stark was feeling melancholy for his recent death. He was then visited by Senator Boynton, who conviced him to help destroy Iron Man, inadvertently giving away an ambush that they have set for Iron Man using Firepower.[9]

Once recovered from the injuries sustained in battle against Firepower, Stark came back to the towering administration building, sending a memo to all the employees quoting: "The dark days are over. We're on the move again!".[10]

Some time later, when he was back from deep space, Tony Stark told Rhodes that the stresses from his recent heavy armor usage was burning out his neuro-net, and that he didn't have long left, before being snatched through time, only to return moments after he left, collapsing in front of a shocked Rhodes.[11]

While hospitalized, Tony was able to battle the Masters of Silence by remotely controlling his Iron Man armor; feeling that this was not going to be effective, Tony created a new suit of armor to battle his foes.[12].

Iron Man then tricked the Masters of Silence into entering his simulator room, where he disoriented them with holographic tricks in battle. Meanwhile, Rhodes contacted S.H.I.E.L.D. to find out who framed tony for the plant meltdown. When he presented the evidence linking Stane International and Justin Hammer to the event, the Masters withdrew from battle. Ashamed of themselves, they offered their services to Stark to reclaim their lost honor. Iron Man, Rhodes and the Masters all prepared for an assault on Justin Hammer.[13]

After returning from Justin Hammer's Villa, Stark called all his main staff to arrange the details of his fake death.[14]

Right after the ash scattering ceremony, the Stark Enterprises Headquarters were attacked by the Spymaster, Beetle, Blacklash and Blizzard in order to tap into Stark's computers to steal company secret files. The villains were easily defeated by Iron Man, who was in turn treated as hostile by the Avengers West Coast, as they were aware there couldn't be Tony inside the armor.[16]

As the fight raged nearby, Kathy Dare shot herself in the head and died; Pym eventually defeated the villains by shrinking them and Kathy's body was then taken away.[17]

After Rhodes had his first board meeting, he received news of a Stane International nuclear facility being attacked by the Atom Smasher, and decided to intervene as Iron Man.[18]

Back from the Stane International facility, Rhodes immediately ordered Stark Enterprises to shut down all their nuclear activity and clean any toxic waste dump. Meanwhile Anthony Stark was revived by injecting him with an artificially-engineered viral transcription agent, which rewrote the genetic code of the techno-organic parasite and replaced his central nervous system.[19]

Shortly thereafter, a thief named Harlow broke into Stark's complex and stole some test tubes, which were later found in a nearby town by Ant-Man.[20]

A while later, Jim Rhodes refused to give his armor back to Tony and flew away.[21]

After a brief battle, Iron Man and War Machine were both suddenly kidnapped by the Mandarin.[22] After the Mandarin's defeat in Hong Kong, Tony returned to the Stark Enterprises main offices.[23]

After the death of Tony Stark,[24] Stark Enterprises and its corporate offices were bought by Fujikawa Industries.[25]

Like this? Let us know!
Retrieved from "https://marvel.fandom.com/wiki/Stark_Enterprises_Headquarters?oldid=5522787"
Community content is available under CC-BY-SA unless otherwise noted.