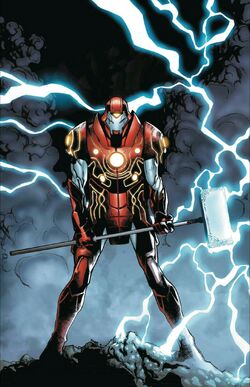 I am not a man who wants to die, Eitri... but nor will I lay down for man or elf. If they want weapons-- I say we give them the business end first.

After gaining the power of the Infinity Stones, Gamora sealed the souls of the universe within the Soul Gem. In order to incapacitate its inhabitants, she additionally folded the universe in half, merging every soul with another. This course of action accidentally resulted in the creation of Warp World, a pocket dimension where history was rewritten and adapted to the fused beings. Inside Warp World, Iron Man and Thor were merged together into Iron Hammer.[1]

Stark Odinson was the son of Howard Odin, the Chieftain Executive of the Aesir of Asgard. While Odinson dreamed of serving the realm as an armor-clad warrior, the arrogance that stemmed from his immortality and godhood saw him denied of the right by Howard. While Stark raged over his father's decision, his adopted brother Stane tried to calm him, only for Stark to attack him and mock his mortal lineage. Howard interrupted the scuffle; declaring it emblematic Stark's vanity that made him unworthy of the warrior's role. Howard stripped Stark of his godhood and cast him out into the Earth with no memories of his past life, denying him the knowledge of his true heritage until he learned the pain and loss that came from being a human.[2]

The amnesiac Stark awoke in a freezing storm in Norway, only filled with instinctive knowledge of unknown and advanced technologies. With his gifted intellect and drive, Stark went from nothing to the fifth richest man in Europe in the span of five years, building up a tech-industrial company under the name Sigurd Stark. Despite his riches and success, Sigurd was left haunted by his lack of memories, frequently driving him to drink. Traveling through the tundra while lost in thought, Sigurd stumbled into a mysterious unmarked forest, and ventured deep into it, urged by a magical lure cast by the leader of the Dark Elves, Malekith. Sigurd was ambushed by a band of Dark Elves, and his leg was pierced with a poisoned arrow, leaving him crippled. Under the orders of the Krimson Kurse, the Elves spared the dying Sigurd and took him to aid their other prisoner Eitri the Weapon-Smith in building weapons for their forces.

The two prisoners conspired to build a Stark a suit of armor to keep him alive and to escape protected from the Dark Elves' arrows, finishing just as the poison in Sigurd's systems had drained his body of any ability to move. The poison in Sigurd's heart was stopped by the runic inscriptions on their armor's chest plate, but he was still too drained to regain his strength in time to stop the arrival of the Krimson Kurse. Eitri revealed a secret weapon he had forged his new friend, a warhammer made of cold iron that would supercharge the armor and restore Stark's strength, before leaving to delay Kurse long enough for Stark to find the strength to wield it. Forcing his broken body to move and lift the hammer, a bolt of lightning struck the workshop, and Sigurd Stark rose once again, clad in the rune-inscribed armor of the Iron Hammer. Seeking vengeance for his fallen friend, Stark defeated the Krimson Kurse and the Dark Elves, discovering in the process the decayed and mummified face of his missing friend Algrim Vanko beneath Kurse's mask. Refusing to allow the Elves to keep his fallen friend enthralled, Siguard reduced the Krimson Kurse to ash.[3]

Mourning his friends' deaths, Stark swore to hunt down Malekith. Recalling how Eitri would speak of the secrets of the All-Father of Asgard, Stark deduced he would need access to them to battle Malekith. Accidentally using his armor's magic to have his on-board A.I. H.E.I.M.D.A.L.L. open the B.I.F.R.O.S.T., Stark ventured into Asgard. While travelling through the rainbow light between the two dimensions, Sigurd was overwhelmed by his lost memories, and discovered his true identity of Stark Odinson. Arriving to Asgard, Sigurd was reeling from disgust at the man he was in his past life, preventing him to notice a sneak attack from Malekith. Malekith quickly overwhelmed Stark with the power of his ten rings, smashing him through the walls of the prison still holding the rest of the Aesir captive.

Stopping their fight briefly, Malekith revealed the existence of an alliance he had forged with Madame Hel to obtain each of the Ten Realm-Rings, magical tokens of office used by the rulers of each realm. Malekith additionally revealed his third ally, Stane Odinson himself, turned traitor out of spite for his treatment as a lesser being and the promise of Stark's death. His time as a mortal teaching him just how poorly he treated his brother, Sigurd attempted to reach out and apologize, but Stane refused him, even when Howard revealed that Stark's exile had truly stripped him of all his Aesir gifts, leaving him as mortal as Stane himself. Malekith moved to strike again, firing the Odin-Beam from the Ring of Asgard, but Stark quickly opened up his chest-mounted B.I.F.R.O.S.T. once again and redirected it, releasing the Warrior Machines Three from their prisons. While Malekith distracted himself using his rings to stop the Warrior's advance, Sigurd was able to strike him with his hammer, burning him with the cold iron and leaving him with only four of his rings active since each needed time to recharge after use. Stark goaded Malekith into firing the electrical blast from the Ring of Midgard, supercharging his hammer and allowing him to deliver the killing blow, avenging Eitri and Algrim.

With Malekith's plans undone, Madame Hel and Stane were forced to retreat, allowing Sigurd to free his father and the rest of the prisoners. Proud to see Stark's return, Howard declared that he would reinstate Iron Hammer's immortality, but Sigurd refused him, realizing that he only truly came to understand the value of life through the risk of death. Sigurd chased after Madame Hel, and explained his motivations and respect for her; that he would choose to stay a mortal man, Sigurd Stark, and a hero, despite knowing the price would one day mean his own death. Sigurd's words moved Madame Hel, who admitted that she was unused to anything but the fear of mortal and the contempt of the immortal, and the two shared a passionate kiss.[2]

Some time later, when the monstrous Devondra began to consume Warp World, countless scaled-down manifestations of Devondra started appearing all over the world. Iron Hammer was fighting these creatures when he was reached by Emma Frost's worldwide telepathic rally to fight Devondra's main form in the confines of Warp World.[4] Following Gamora's defeat, Adam Warlock and his allies restored the universe to normalcy. However, they made it so Warp World continued existing within a facet of the Soul Gem, so the new life forms that resulted from its creation wouldn't cease to exist. Inside Warp World, some of the heroes that fought Devondra including Iron Hammer decided to remain banded together, and formed the Defenders.[5]

Like this? Let us know!
Retrieved from "https://marvel.fandom.com/wiki/Stark_Odinson_(Warp_World)_(Earth-616)?oldid=6447814"
Community content is available under CC-BY-SA unless otherwise noted.