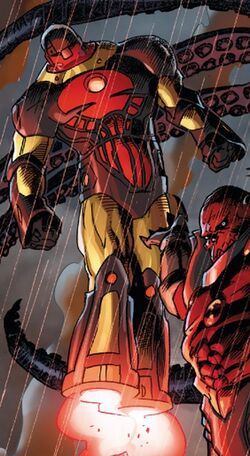 Sentinels. Murder machines created to hunt down and eliminate mutants. Reprogrammed in this instance to target heroes. I've destroyed countless Sentinels in my time... but I admit this situation comes with an unique feeling of satisfaction. Finally... these "heroes" know what it's like to be the target of such hate. Finally... they will know what it means to have Magneto defending them.

Under the influence of the Red Skull, who also had erased from him any memory of their construction, Tony Stark designed a model of Sentinels based on the knowledge of different super heroes he acquired after the Civil War.

When the Red Skull became the Red Onslaught, and the Avengers arrived to Genosha to stop him, he deployed the Stark Sentinels.[1] The Stark Sentinels managed to take down every hero but Iron Man, who was saved at the last minute by a gang of super villains gathered by Magneto.[2]

A Sentinel was finished off by the Absorbing Man after absorbing its Adamantium coat, and the other one was destroyed after the Red Skull was defeated once the Scarlet Witch and Doctor Doom cast an inversion spell. All the heroes held prisoners inside the Sentinels then were broken free.[3]

The Stark Sentinels have the capability to counter their target's strengths, and bathe them in Pym Particles to shrink them and hold their target prisoner within themselves.

However, as the Stark Sentinels were derived from Tony Stark's files on super heroes, they are not able to counter most supervillains.[2]

Like this? Let us know!
Retrieved from "https://marvel.fandom.com/wiki/Stark_Sentinel?oldid=6436643"
Community content is available under CC-BY-SA unless otherwise noted.