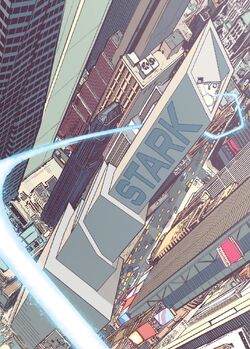 Located in Times Square, this Stark Tower housed Tony Stark's penthouse and personal laboratory,[2] as well as the headquarters of Stark Industries.[3]

In the beginning of the second superhuman civil war, Iron Man kidnapped the Inhuman profiler Ulysses Cain from New Attilan, having been pushed over the edge following the death of War Machine.[4]

In retaliation, Queen Medusa launched several attacks on Stark's personal life. Believing that Medusa had been too merciful, Triton contacted Maximus the Mad to escalate the attacks. The first objective targeted by Maximus and his rogue Inhumans was the Stark Tower,[5] which resulted in the death of innocents in Medusa's name.[6]

Retrieved from "https://marvel.fandom.com/wiki/Stark_Tower_(Times_Square)?oldid=5730055"
Community content is available under CC-BY-SA unless otherwise noted.