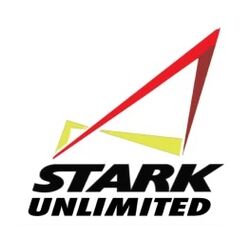 Following his return from a coma, Tony Stark founded the company Stark Unlimited as a think tank for future technologies, as well as an ideas incubator for the Iron Man Armor. It was headquartered in a skyscraper located in Washington Square Park.[1] Stark Unlimited also served as a conglomerate, absorbing as subsidiaries several other Stark companies, such as Stark Solutions, Stark Resilient and Stark International.[2]

After Tony Stark was delegitimized since his current body had been engineered from scratch, making him an artificial being, his adoptive brother Arno laid claim to Stark Unlimited because the bio-restructuring pod used to build Tony's body was of his design, making Tony and all his inventions his property as well. Stark Unlimited was merged with Arno's other company, Baintronics. In the process, head of security Bethany Cabe was fired, and Armed Forces liaison Jim Rhodes resigned.[3]

Tony Stark eventually regained control of the company after the fall of Arno and Bain. Believing that the company had too much baggage due to its association with Baintronics, Tony decided to give the company's headquarters to Andy Bhang to use it for Bhang Robotics.[4] Stark Unlimited continued operating on its own, albeit without Stark's intervention since he divested himself of the company.[5]

Like this? Let us know!
Retrieved from "https://marvel.fandom.com/wiki/Stark_Unlimited_(Earth-616)?oldid=5820656"
Community content is available under CC-BY-SA unless otherwise noted.