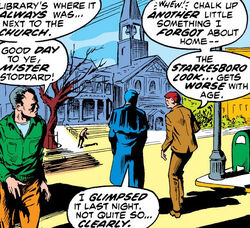 Starkesboro was a small town in New England, north of the Quabbin Reservoir,[2] located in Maine,[6] or in Massachusetts,[1] and set by the edge of the Ocean. Starkesboro was described as a "ghoul-haunted town",[3] and was involved with many eldritch powers, including the Serpent Men of Starkesboro,[2] Sligguth,[3] N'Gabthoth,[4] werewolves,[7] and Slorioth.[8]

The town of Starkesboro fell under the influence of the Demon Sligguth, spawn of the Elder God Set, early in the town's history, its fishermen having retrieved a cross intwined with a serpent found floating in the sea. Over the following centuries, the people of Starkesboro became a new breed of Serpent Men who worshipped Sligguth, although their worship remained so secret that even some of its inhabitants remained ignorant of the town's true culture. In modern times, the call of Sligguth caused townsfolk who had moved away to return; in reaction to his fiancée Bethel Doal apparently abandoning him, Ethan Stoddard sought out the help of Doctor Strange. With his intervention, both Sligguth and his fellow demon N'Gabthoth were slain, although the still-transformed townsfolk then fled into the night never to be seen again, leaving Starkesboro empty.[9]

A new generation of business and homeowners took over the abandoned town sometime thereafter, but also fell to magical interference. Wishing to obtain the power of the Moongem for himself, Dredmund Druid came to town posing as a self-help guru, only to use hypnosis to dominate the inhabitants. His experiments to reconstitute the gem and control its power with the aid of Nightshade resulted in Starkesboro becoming a town of werewolves, both the inhabitants as well as werewolves who felt summoned to the town by the Moongem. A mass of super-heroes including Captain America, Wolverine, and Cable, all following allies and friends afflicted with lycanthropy or similar animal-like alter egos, descended upon Starkesboro and ultimately defeated Druid. This time, the townsfolk were freed from their transformative curse and returned to their normal lives.[7]

Most recently, Starkesboro was seen when Doctor Druid assembled a team of Secret Defenders to prevent the resurgence of Slorioth in Starkesboro. A powerful and dangerous mystic entity, Slorioth ravaged Earth 15,000 years ago until a cabal of ancient sorcerers bound his body and soul to the land that was later known as Starkesboro, perhaps explaining the small town’s odd attraction of dangerous mystic artifacts.

Dr. Druid has bargained to preserve the life of his lover, Jillian Woods, using one of Slorioth’s talismans, which cost a portion of his soul every time Jillian was temporarily brought back to life as the Darkforce-composed Shadowoman. Corrupted by the loss of his soul, Druid had actually formed the Secret Defeners – using Sepulcre, Cadaver, Deathlok, Drax, and Dagger – to get him past guardians keeping Slorioth imprisoned so that he could release him. They were successful, and Druid used the talisman to unlock Slorioth’s prisoner, releasing him the grounds of Starkesboro.

Druid's Secret Defenders, plus a time-displaced band of the original Defenders, fought Slorioth. A few of them confronted Dr. Druid himself, and managed to summon the Living Tribunal. Deciding that his existence threatened even Eternity, the Tribunal banished Slorioth to an unknown place, the entity abruptly drawn from Earth and disappearing into hovering clouds, and matters around the world soon returned to normal.[8]

With a millennia-old demonic entity no longer bound to the earth below it, Starkesboro is presumably now at long last exactly what at first glance it appears to be: A perfectly normal, quaint Massachusetts town.[citation needed]

Like this? Let us know!
Retrieved from "https://marvel.fandom.com/wiki/Starkesboro?oldid=6547474"
Community content is available under CC-BY-SA unless otherwise noted.