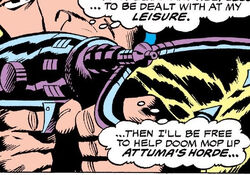 This rifle-like metallic weapon with a forked barrel was built by Doctor Doom. Instead of shooting slugs, the gun shoots an energy bolt to paralize enemies within an energy shell.[1][2] Impacted victims -as the machine can hit several people at once-[1] become prisoners, frozen in their positions and requiring no air or food, with their body functions interrupted - but they can perceive their surrounding and attempt to release themselves only once.[2] The process takes a few seconds after the hit to be completely effective; should the shooter stop the stream before that time, the prisoners would release themselves with the energy dissipating.[1][2] Otherwise, the shell will keep the prisoners immobile permanently, until it is removed by manipulating the rifle (specifically reversing the gun's polarity) or destroying it.[1][2] The hull theoretically could even paralyze the Hulk.[1][2] Sometimes, Doctor Doom outfits one of his Servo-Guards -only one member of a unit- with an operative unit of this device.[2]

While the Sub-Mariner destroyed the original stasis gun, Doom may have had manufactured mor eunits and kept them at Castle Doom armories.[2]

Like this? Let us know!
Retrieved from "https://marvel.fandom.com/wiki/Stasis_Gun_(Doctor_Doom)?oldid=6437749"
Community content is available under CC-BY-SA unless otherwise noted.