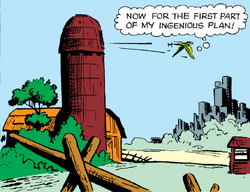 Staten Island is the third largest and least populated of New York City's boroughs. It is an overwhelmingly white and upper-income suburban area with rows of neatly manicured lawns. Separated from the city by Upper and Lower New York Bays, it is closer to New Jersey than New York and is linked to Manhattan by the Verrazano Bridge and the Staten Island Ferry. With docks and shipping facilities located on the north and northeastern shores, Staten Island's industrial activities include oil refining, chemical production, communication equipment, and soap.

At some point during the seventeenth century, some desperate humans made a legal agreement with monsters, granting them ownership of Staten Island. The terms of this contract were enacted in the twenty first century when the then-current Monster King led a mass migration of his people to the island. A man named Blaylock hired Elsa Bloodstone and Deadpool to kill the King, hoping that it would drive the monsters back to wherever they came from. He didn't know however, that according to ancient monster law, whoever kills the Monster King, becomes the next Monster King, and when Deadpool succeeded in his task, Wade was declared the new King, and thereby the new ruler of Staten Island.[1]

Staten Island is stated as The Bone Zone by Bone Beast Queen.[5]

Like this? Let us know!
Retrieved from "https://marvel.fandom.com/wiki/Staten_Island?oldid=6467590"
Community content is available under CC-BY-SA unless otherwise noted.