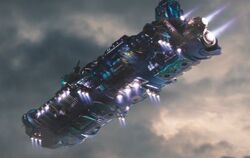 The Statesman was a large Sakaaran heavy transport ship in the Grandmaster fleet on Sakaar. The ship was commandeered by Korg and the other escaped Sakaaran prisoners. With help from Loki, Korg took the ship to Asgard to rescue the remaining Asgardian refugees from the assaults of Hela and Surtur.[3]

While en route to Earth, the Statesman unfortunately encountered the Sanctuary II.[3] Before being boarded by Thanos and his Black Order, Valkyrie and some of the refugees were able to retreat via escape pods.[4] To obtain the Tesseract, Thanos and his Black Order slaughtered the remaining Asgardians on board and murdered both Loki and Heimdall. After placing the Space Stone into his Infinity Gauntlet, Thanos used the Power Stone to completely destroy the ship. Sometime after the ship's destruction, answering a distress signal, the Guardians of the Galaxy arrived in the Benatar to find only debris and a comatose Thor.[5]

Retrieved from "https://marvel.fandom.com/wiki/Statesman?oldid=5612516"
Community content is available under CC-BY-SA unless otherwise noted.