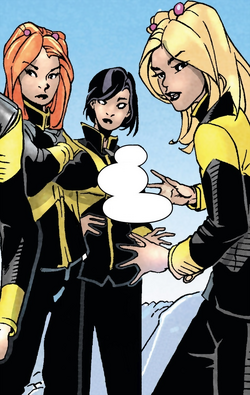 The Stepford Cuckoos of this world stayed behind at their school in order for their teachers to go to the Jean Grey School for Higher Learning for the reading of the last will and testament of X-Men founder Charles Xavier, which revealed the existence of the omega-level mutant Matthew Malloy.[1]

They spent the entire time at the school while the X-Men tried to make contact with Malloy. The Cuckoos even set up a training simulation for all the students to participate in, but after finding out the fight was against a holographic version of the Avengers, the sisters shut it down due to the protest of fellow student Triage.[2]

The girls spent there last moments in a telepathic hive mind to keep tabs on their mother Emma Frost, but lost connection with her after they were hit with a psychic blacklash from Emma's death, which was caused by Malloy.[3]

Like this? Let us know!
Retrieved from "https://marvel.fandom.com/wiki/Stepford_Cuckoos_(Earth-14923)?oldid=6420398"
Community content is available under CC-BY-SA unless otherwise noted.