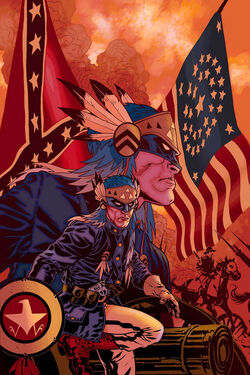 All of us, even the Indians, came to this land from somewhere else, drawn here by a unique opportunity - a chance to pursue our dreams and reinvent ourselves. But men like Barnes stole that birthright from too many of our brothers, until the injustice tore this nation apart. And so a Red man taught a Black man to find a White man who would bring us all back together. Why it had to work that way, and why his search led to me, I'll never know. Maybe We-Pi-Ahk saw me save those children in the barn. Maybe all it took was that small act of decency in the midst of the killing. Whatever the reason, the Eagle chose me to ensure that for all of us, America remains the land of opportunity.

Once a mere Union corporal fighting under the Redlegs Regiment, Stephen Rogers was entranced by his regiment's leader, the charismatic (and seemingly compassionate) Colonel "Bucky" Barnes. However, when he discovered Bucky was directing the regiment to kill and loot civilians, Rogers protested and was shot for his actions. Trying to run away, he ended up entangled with some fleeing horses, who dragged him for hours, during which he began to hallucinate about an eagle-like being who called him "Union man". He was found near death by Private Sam Wilson from the Third Indian Home Guard.

Suffering from horrible agony and not expected to survive, Rogers murmured that he no longer cared which side won the war. Wilson, who'd been raised by a medicine man, believed that Rogers had been brought to him to serve as a vessel for We-pi-ahk, the Eagle Chief, destined to reunite the country. In order to save Rogers' life, Wilson summoned the spirit of the Eagle Chief, who endowed Rogers with his powers. Just as this was happening, Bucky barged in, having heard that Rogers was still alive. Upon looking at Rogers' transformation, Barnes' face was burned away, leaving only a skull. Enraged, he ordered the Redlegs to fire on all non-Redlegs, not caring that he was killing soldiers from his own army. Wilson leapt at him and was shot in the chest. Rogers emerged, transformed into an ideal being, bearing the Shield of We-Pi-Ahk. When thrown, the shield transformed into an eagle made of pure energy, which attacked Bucky.

Rogers' actions after the war include securing victory at Chickamauga and Spotsylvania, rescuing Union prisoners at Andersonville, and stopping Sherman's March from reaching Atlanta. He helped end the war a year before it ended in our reality, ensured that President Abraham Lincoln survived his second term, fought the Ku Klux Klan, and prevented the Indian Wars.

However, Buck Barnes (then taken the identity as the White Skull) became a nemesis to Rogers and resurrected the KKK as the White Skulls to racially terrorize America. Rogers's conflict between him and the White Skulls continued among their descendants, in which is cited by many that this conflict will never end until racism is purged from mankind. By the modern day, Rogers' great-grandson continues to uphold his ancestor's legacy to protect America's values under the name General America.[citation needed]

Endowed with the spirit of We-Pi-Ahk, Rogers was in peak human condition. He was also presumably mystically protected from harm.

Rogers bore the Shield of We-Pi-Ahk which, when thrown, transformed into a manifestation of the Eagle Chief.

Like this? Let us know!
Retrieved from "https://marvel.fandom.com/wiki/Stephen_Rogers_(Earth-717)?oldid=5513466"
Community content is available under CC-BY-SA unless otherwise noted.