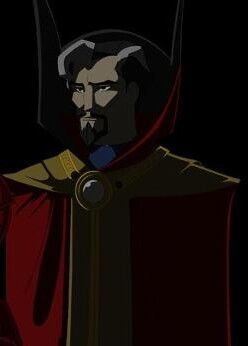 | HistoryText = It is likely this version's history is largely similar to those of Earth-616's counterpart. When it became clear that the Hulk was far too dangerous to remain on Earth, less he pose a danger to humanity, Doctor Strange, along with the rest of the Illuminati, regrettably decided the best course of action was to incapacitate and launch the Hulk into space to a habitable but unoccupied planet where he would pose no threat to anyone. He stood silently when Iron Man recorded a holographic message of regret to the Hulk on the shuttle.[1]

| Powers = Seemingly those of Stephen Strange of Earth-616. | Abilities = Presumably those of his Earth-616 equivalent. | Strength = | Weaknesses =

Retrieved from "https://marvel.fandom.com/wiki/Stephen_Strange_(Earth-10022)?oldid=6428194"
Community content is available under CC-BY-SA unless otherwise noted.