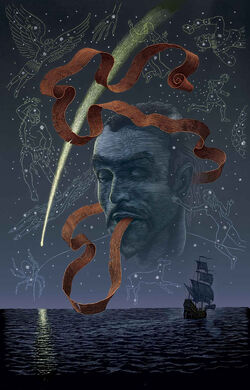 In his youth, Stephen Strange was kidnapped by foreign sailors and taken to a slave market in Ankhara. He was sold to a doctor and learned many things during his time with him. Offered his freedom if he retrieved secret herbs from the East, Strange went on that mission. Climbing high into the "mountains beyond the Indes" he nearly died but was rescued and brought to a distant monastery. Here Strange learned much of magic. Strange completed his mission and gained his freedom, then saved Clea from trouble in her distant land and took her as his bride. Returning to England he did a favor for Queen Elizabeth I, who made him her physician. When strange weather had plagued England and the world for some time, the Old Man of Templars offered a powerful weapon to Strange for safekeeping. Strange felt very certain that the world was coming to its end and told this to the Queen, who had him meet with Sir Nicholas Fury to discuss it. Strange meditated to learn more of the Strange weather, but found few answers. One night Strange felt oddly compelled to go to the castle and take certain materials with him. He did this and found Virginia Dare had changed form. Strange was able to return her to normal before her transformations became known of by others and the Queen, just before being herself killed, assigned him to care for the sick child. Sensing that Fury's agent and the weapon of the Templars had been taken by Count Doom, and that Sir Reed and his allies were also prisoners there, Strange was able to convince Fury to betray the new King James and attack Latveria. While further investigating a means of saving the world, Strange passed out and was spiritually brought to the Moon by Uatu the Watcher. Uatu explained to Strange what had been happening and gave him a vision of all the knowledge he needed, but he could not tell anyone of it while he lived. King James had Strange imprisoned and Stephen had Clea swear not to interfere. Strange was beheaded for treason. Clea took her husband's head from the pike it had been placed upon and communicated with him. She brought his head to America where, freed from his oath of not telling what he knew, he could advise, through Clea, the others. After the world had been saved, Clea asked the others to bury the head with his body.

Seemingly those of Stephen Strange of Earth-616.

This character was mirror after Elizabeth I's consultant John Dee.

Like this? Let us know!
Retrieved from "https://marvel.fandom.com/wiki/Stephen_Strange_(Earth-311)?oldid=5397062"
Community content is available under CC-BY-SA unless otherwise noted.