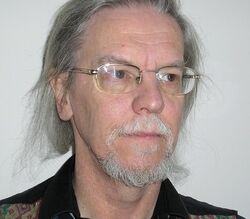 Steve Moore was a British born comics writer and occultist. He was a lifelong friend and something of a mentor to Alan Moore, though the two were not related. He died on 16th March 2014, aged 64.

Moore worked for most of the more significant British comics publishers, creating the Future Shocks format for 2000AD (as well as working on many other 2000AD strips including Dan Dare), working extensively for Warrior magazine on characters including Axel Pressbutton and Father Shandor, and writing many of the early strips in Doctor Who Weekly/Monthly and Hulk Comic for Marvel UK. He created the fan favourite characters Abslom Daak-Dalek Killer and Kroton the Cyberman, and also wrote various stories featuring The Doctor, the Hulk, Ant-Man and Nick Fury, amongst others. He later worked extensively in American comics, mostly for independant companies but also on occasion for Marvel.

Moore frequently used the pen name Pedro Henry in the 1970s and 1980s.

Like this? Let us know!
Retrieved from "https://marvel.fandom.com/wiki/Steve_Moore?oldid=6837650"
Community content is available under CC-BY-SA unless otherwise noted.