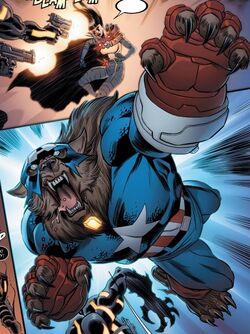 I'm in better shape than the first time I wore the Godstone, but it takes constant focus to keep from going feral. I'm not fit to lead. This is your op. You've earned it.

Captain America seemingly had the same history as his Earth-616 counterpart.

As Spider-King, he was one of the former superheroes who were sent to trap Resistance fighters at Horizon Labs. While the trap worked, the resistance fell into it on purpose; to rewrite the spiders DNA to remove Spider-Queen's control over them. For Steve, he was given the Godstone and transformed into a Man-Wolf.[1]

Joining the Resistance, Thompson tried to relieve control to Steve. However, Steve declined, saying the resistance was better in his hands.[2]

Steve took part in the resistance's assault on The Queen's Castle. He advocated killing Soria to free Manhattan.[3] Captain America watched as Flash and his symbiote sacrificed themselves to get Spider-Queen in position to get her killed by Stegron and his Dinosaurs.[4]

Days later, he became involved in the rebuilding of Avengers Tower and was present when Dino-Thor, the Thor Coprs representative of the Valley of Flame, came on behalf of God Emperor Doom to pick a new baron of Spider-Island. Steve and the rest of the reformed Avengers all voted Spider-Man.[4]

Seemingly those of the John Jameson.

Like this? Let us know!
Retrieved from "https://marvel.fandom.com/wiki/Steven_Rogers_(Earth-19919)?oldid=6443073"
Community content is available under CC-BY-SA unless otherwise noted.