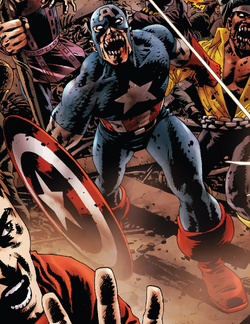 Little is detailed about Colonel America’s life before the zombie plague arrived on Earth-2149, however it can be presumed that it followed much the same path as Captain America from Earth-616. Other than the obvious rank difference, the only other difference from Earth-616 is that Colonel America served as President of the United States of America, like his ultimate counterpart, and like his ultimate counterpart he did not serve a full term.[1]

Colonel America was at Avengers Mansion when a man tried to blast his way into the mansion. He, and the other Avengers greet the intruder and demand he explain himself. The man ranted about an Army of the Dead and to got a little hot under the collar until Scarlet Witch transports him away.

When they got report of purple lightning and Sentry attacking people downtown, the Avengers set off there in the Quinjet, and en route they saw the madman once more panicking people. They land and speak to him, and when Spider-Man offered to help, Colonel America asked him to wrap up the man and take him away.

When they arrived to tackle Sentry, they were quickly overpowered, bitten and infected with the zombie contagion. While they were in the middle of killing the populace, Spider-Man swept down, and rescued a blonde girl, but didn't got very far as Colonel America launched himself into the air and bit Spider-Man on the shoulder.

A seemingly infected Spidey then takes Hawkeye hostage by threatening to eat his brains. The Avengers, however, tell him not to bother as the dead taste horrible, and it seems only total destruction of the brain can kill the zombies. After a brief stand-off, Spidey swings off with the dimension-hopping hero, Ash, still wrapped up.

Col. America and the rest of the Avengers continue their rampage until their appetite is sated, at which point their minds clear a little, and they decide to go back to Avengers Tower to work out how to beat this thing. Unfortunately, by the time they arrive back, the hunger has taken hold once more and they consume Jarvis.

After this snack, and being joined by Giant Man, they are still hungry, and so send out an “Avengers Assemble” message, and wait…

When Beast and Reed Richards find a sizeable stash of meat in Latveria and the surrounding area, Steve and a huge horde of zombies head off to lay siege to Castle Doomstadt.

Unable to break through the castles magical defenses, Col. America is presumably surrounded by the re-animated corpses of the Deadite Legion. Though apparently this is more of an inconvenience than anything else, as he is later seen in New York seemingly none the worse for wear (other than a touch of zombification, obviously).[2][3]

In New York, Rogers appears to keep his head down until Magneto destroys the Baxter Building, at which point he arrives to confront the Master of Magnetism, along with the rest of the Marvel Zombies.

Magneto steals the Colonel's shield using his magnetic powers and throws it back at him, partially decapitating the top of cap's head, effectively scalping. Magneto then manages to escape the zombie horde. When they find Magneto again, he is slowed by an arrow in the side, and though he talks a good fight, Magneto is quickly overpowered and consumed by the zombified heroes.

Sated and reunited with his shield, Rogers and the other zombies take a well earned rest to try and work out what's happening to them. It is at this point that they briefly notice Silver Surfer in the sky. While Rogers is explaining to Iron Man why Magneto's body was not shared with everyone, the Silver Surfer once again appears in the sky above them, and Stark leads the charge against him. With the Herald of Galactus down, Hulk manages, somehow, to bite his head off, and Rogers, Stark, Parker, Pym, Cage, and Wolverine manage to get a piece in them at the expense of the rest of the zombies.

With none of the cosmic being left, the others begin complaining that they didn't get to feed, and as the Colonel vigorously explains to the Beast how things work, a burst of the Power Cosmic shoots from his hand and obliterates Beast's head. Realizing they have somehow been imbued with the Power Cosmic, the seven newly Power Cosmic Zombies, fry the masses of zombies gathered around them in a (fruitless) attempt to improve their flavour, but the dead, even toasted, still tasted bad.

Suddenly, looming over them appears Galactus, who has come to devour their world. They attack him with the Power Cosmic, but he repels them with his much greater power. They retreat to Pym's lab, and formulate a plan for bringing down the giant being.

With the last sheets of Vibranium from Wakanda, the Power Cosmic Zombies build a gun-like contraption which combines all of their individual beams of Power Cosmic into one super strong beam. While moving the weapon into position they notice that a group of zombified super-villains, are attacking Galactus, but having little effect. The Power Cosmic Zombies take their first shot, but it takes another to put him down.

At this point, the heroes and the villains face off for who will get the remains. Rogers goes up against his old adversary, Red Skull, who he seems to have beaten with consummate ease, until the Nazi plunges his hand into Colonel America's exposed cranial cavity and scoops out the remaining brains, killing Rogers. [4]

However, Colonel's brain was "alive", thanks to the Zombie Virus; it would only die of decomposition as time passed or if it were damaged, which was not the case. It was later recovered by Forge and transplanted into the body of the Black Panther's deceased son, T'Channa.

The transplant was successful, but the resulting brain damage caused by the decomposition turned Colonel America into a battle crazed zombie with memory lost, manageable but unable to focus on anything that's not related to war or battle. He helped the humans fight against the zombie Galacti infected still overtaken by the hunger, along with Spider-Man, T'Challa, Hawkeye, Wasp and Power-Man.

After the zombie Galacti lost the hunger and hulk's zombie rampage through New Wakanda was stopped by Reynolds's sacrifice, Malcolm Cortez banished all the remaining zombies to Earth-Z. Cap's last fate in there is unknown, but he probably was killed in previous battles that led to humanity's extinction in that reality.[5]

Seemingly those of Captain America from Earth-616.

Like this? Let us know!
Retrieved from "https://marvel.fandom.com/wiki/Steven_Rogers_(Earth-2149)?oldid=6076502"
Community content is available under CC-BY-SA unless otherwise noted.