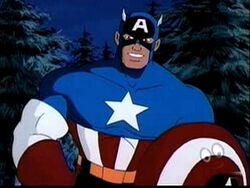 Created during World War II as the Allies' Super Soldier, Steve Rogers was the first to volunteer for the top-secret experiment. Giving him increased strength, speed, and reflexes, the experiment was a great success. Unfortunately, when spies infiltrated the test, they destroyed the lab and killed the scientists who developed the formula, taking its secrets with them to the grave.[1]

As no one knew the correct formula, scientists took educated guesses and created an artificial one in its place. Due to chemical shortages, only another 5 super soldiers could be created. Calling themselves the Six American Warriors, they began to fight the Red Skull, one of the Nazi's most powerful agents.[2]

Captain America acted as Logan's "back up" during a mission to rescue a kidnapped American scientist from the Red Skull. Captain America and Logan infiltrated a Nazi castle but were taken captive themselves after the scientist Andre Cocteau who they were attempting to save turned traitor and alerted the guards to their presence. Cap and Logan escaped, and defeated several Nazi agents and helped stop production of one of their deadliest projects, the Sleeper.

Although Cap and Logan made a great team, Logan considered the mission a failure, and spent 50 years hating the scientist who turned them in.[3] Captain America, meanwhile, was trapped inside a vortex for 50 years along with the Red Skull's after stumbling on his evilest plot.[2]

With the Skull's son desperately seeking to find his father and carry on his work to create the Doomsday Project, he came across the complex and released both his father and the Captain, 50 years after they were trapped. With neither of them ageing a day, they continued to battle and eventually, the Skull activated the Doomsday weapon and his son Rheinholt Kragov became Electro, God of Electricity. Spider-Man and Captain America then teamed up to defeat both the Red Skull and his son. During the battle, Captain America sacrificed himself again and both he and the Red Skull were placed in the vortex. Spider-Man then used the vortex to defeat Electro, and he and the remaining Six American Warriors destroyed it, so neither Electro nor the Red Skull would threaten the world ever again.[4]

Spider-Man later called on Captain America to help him fight the Secret War alongside Iron Man, Black Cat, the Fantastic Four, and Storm. After defeating the villains that the Beyonder placed on the planet, they left as if nothing happened.[5]

Like this? Let us know!
Retrieved from "https://marvel.fandom.com/wiki/Steven_Rogers_(Earth-92131)?oldid=6060396"
Community content is available under CC-BY-SA unless otherwise noted.