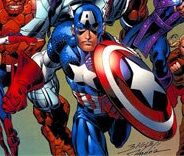 Steve's life was the same as his Earth-616 counterpart up until the point in the Clone Saga during which Mary Jane Watson went into labor early. Captain America led the original Avengers on a mission to stop an invasion from the militant and fascist Earth-9907, which claimed the lives of the majority of the team. He stayed behind to aid the rebels in that reality, thus adding to the list of the dead / missing-in-action. The next iteration of the Avengers aided him in this reality[1], when the Avengers left this reality he gave American Dream the shield that belonged to that universe's Captain America. Steve and Thunderstrike then later returned to their home reality to aid in the fight against Seth.[2]

Captain America was beginning to see his abilities wane due to his advancing age and was fatally injured leading a group of young heroes in battle against the Norse god Loki. Thor used his powers to transform Captain America into a new star as he was dying.[3] Galactus later stated that the new star the Captain had become was the key to his escaping his world-devouring hunger and attempted to use him to create a new universe where he would ascend from his hunger before being defeated.[3]

Like this? Let us know!
Retrieved from "https://marvel.fandom.com/wiki/Steven_Rogers_(Earth-982)?oldid=5747096"
Community content is available under CC-BY-SA unless otherwise noted.