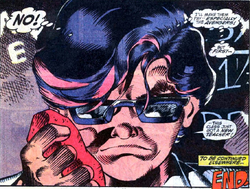 Stevie was a boy who found a magical stone that gave him great powers. In an effort to impress his schoolmates he decided to use his powers to steal Captain America's Shield.

The Great Lakes Avengers were summoned to a carnival fun house by a message from the "Captain America" stating an impostor had stolen his shield. Cap and the Human Torch were summoned by "Rick Jones" who says he is being held hostage in the same fun house. The two sides do battle and Stevie uses his Ruby's power to animate the fun house robots to try and capture the shield.

One of Stevie's robots do eventually capture the shield and places it in a package for him. He is delighted to present it at school the next day claiming Captain America gave it to him personally. When he removes the shield from the package he is mortified to find it was a wax duplicate from the carnival's wax museum. Captain American had deduced that someone or something was trying to capture his shield and made a switch at some point in the battle.

Stevie vowed revenge on the Avengers but has not been seen since.

Like this? Let us know!
Retrieved from "https://marvel.fandom.com/wiki/Stevie_(Earth-616)?oldid=4502880"
Community content is available under CC-BY-SA unless otherwise noted.