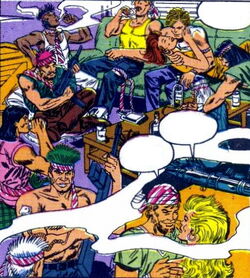 The Stone Perfs were a Latino gang based in East LA, who Hawkeye and Mockingbird first encountered, when they witnessed the gang doing a drive by shooting in Hollywood. They pursued the shooters, capturing the gang members.

Hawkeye then waged a one-man crime fighting campaign against the gang which was involved in the drug trade at the street level, disrupting their activities and protecting citizens from their harassment and violence. Meanwhile the vigilante Terminizer, followed him, killing any Stone Perfs that Hawkey encountered. Due to media attention, the crimelord whom they answered to, Lady Lotus betrayed the gang, setting them up to be incinerated.[1]

Retrieved from "https://marvel.fandom.com/wiki/Stone_Perfs_(Earth-616)?oldid=5551381"
Community content is available under CC-BY-SA unless otherwise noted.