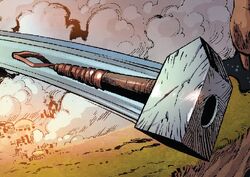 Stormcaster is a hammer created by Loki, which was presented to Ororo Munroe. When she picked up the hammer, Ororo gained access to divine power, much like the power of Thor, and became the Goddess of Thunder. She gave up the hammer, when she realized that Loki manipulated her.

Several years later, Ororo once again got the Stormcaster from Thor. She again became the Goddess of Thunder, but in a fight with Thor, she used Mjolnir to destroy it.[1] Despite the hammer's destruction, it reappeared in the ruins of Old Asgard not too long afterwards.[2] Awakened by the prayers of Storm's foster mother Ainet Mwangi that her daughter was given the power of divinity,[3] the hammer returned to Earth and reunited with Storm.[2] After Storm used the Stormcaster to defeat the malignant god responsible for Ainet's death, Uovu, the hammer turned to dust, having fulfilled its objective.[4]

On the Earth-904 Ororo's hammer was named Stormbringer.[5]

On Earth-1027 Ororo gained Tarene's hammer, which transformed itself into a copy of Mjolnir. [6]

Retrieved from "https://marvel.fandom.com/wiki/Stormcaster?oldid=4604456"
Community content is available under CC-BY-SA unless otherwise noted.